Danilo Vukotic found a home at The University of Toledo.

A senior on the Rocket men’s tennis team, Vukotic initially took a slight detour to New Jersey from his home in Nis, Serbia, before landing in Ohio. Both places are a long way from home, but he could not have been more satisfied with the final destination on his collegiate journey.

Becoming a top tennis player also was a bit of a journey for Vukotic. As a boy, he played several sports: basketball, soccer, volleyball and, of course, tennis. His path was not settled until he was 14, when he reached the semifinals of the U14 Tennis National Championship and was nationally ranked in the top five for his age group in Serbia.

“That gave me a pretty good indication that I can keep playing well and on a high level,” Vukotic said.

Though Vukotic had always dreamed of playing professionally, he opted to pursue the collegiate route instead.

“After giving it some thought, I started thinking that college tennis might even be a better idea than playing professional tennis,” Vukotic said. “Traveling all over the U.S., playing the sport I love, and getting a degree seemed like a good deal to me.”

Moving from Serbia to the United States was obviously a huge decision, and it took Vukotic and his family some time to find a school that was the right fit for him. Finally, in June 2016, he inked a national letter of intent to play for Farleigh Dickinson in Teaneck, N.J. Vukotic enjoyed a successful freshman year at FDU, earning first-team all-conference honors and helping his team reach the semifinals of the Northeast Conference Tournament.

Despite his success as a freshman, the fit wasn’t quite right, so Vukotic opted to transfer. He began talking to some of his friends who played collegiate tennis, and one of those friends, former Rocket and fellow countryman Luka Vitosevic, suggested he check out Toledo. 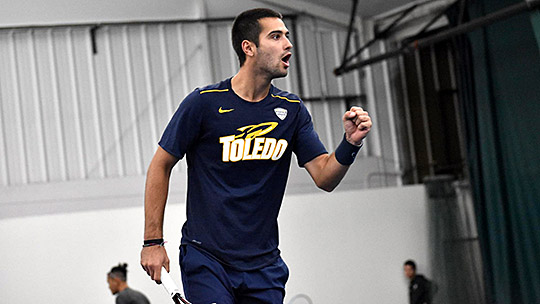 Danilo Vukotic wrapped up a successful tennis career this spring and is set to graduate with a degree in information technology.

“I liked the coach [Al Wermer] and the school even though I did not come for a visit,” Vukotic said. “I saw pictures, and coach was FaceTiming me so I saw some things around campus.”

Along with Vitosevic, Vukotic also mentioned tennis player Nikola Arsic and swimmer Jovana Djuric as fellow Serbians who made his transition to Toledo easier.

“I don’t know what I would have done without them,” he said. “It really makes it more special and unique. People don’t realize how much it helps. Speaking my native language, hanging out with them, sharing stuff and asking for advice when we’re going through a rough patch, etc. Those were the people that made it feel like home.”

With friends by his side and a comfortable setting, Vukotic continued to thrive as a tennis player. This past season, he was a two-time Mid-American Conference Player of the Week honoree, once in singles and once in doubles, and he was on track to wrap up his career on a high note.

“This year he clearly came in with something to prove,” Wermer said. “His mindset was palpable and consistent. Danilo was clearly headed for an All-MAC finish to this year. He mobilized the team. His leadership kept a young roster on the same page.”

Unfortunately, Vukotic’s senior tennis season was cut short due to the coronavirus pandemic. What made it even worse for him was missing out on commencement and graduation celebrations this spring. Vukotic comes from a place where donning a cap and gown is not a given, so that made it sting just a bit more than it might for an American student.

“For people back home, going to the U.S. is like a dream, and college is only really seen in movies,” Vukotic said. “For me, throwing my graduation cap in the air would have been a dream come true. I’m super sad I will never get a chance to experience walking at the Glass Bowl and getting the honor of being there with all the other graduates. My family was supposed to come the week of graduation as well. They were supposed to stay for graduation and then we were going to go to New York City to explore. I wanted to show them so many places, but, unfortunately, we are unable to do that now.”

Despite his disappointment, Vukotic is making the most of his time at home. He flew home shortly after the news that campus was shutting down. While self-isolating for 28 days, per Serbian law, he took time to reflect on his time as a college student.

“I think I matured a lot during these last four years, especially my three years at Toledo,” Vukotic said. “I’ve been thinking a lot about how lucky I am to have spent four years in college in the U.S.”

An information technology major in the College of Engineering, Vukotic already has a job lined up in his chosen field. And while he was not able to end his athletic career on his terms, he is doing everything he can to go out on a high note academically.

“I’ve been keeping my head up because this semester has been one of my best semesters, if not the best semester, grade-wise,” he said. “Even with everything going on, I have managed to keep myself motivated and will try to finish with all A’s.”