They say college is a time of change and transformation.

That definitely has been true for senior Caleb Scoles.

Scoles started his college life as a player on The University of Toledo baseball team and then ended it as a coach. In between those two milestones was a series of physical setbacks that sent him on a challenging path he certainly didn’t anticipate. Nevertheless, Scoles ultimately found his college journey very rewarding.

A Richland, Mich., native, Scoles became a Rocket following a prep career in which he was a two-time all-district and all-league pitcher at Gull Lake High School. While he had other offers, the campus and academics swayed him into donning the Midnight Blue and Gold.

Scoles’ baseball career, however, did not get off to a great start. He missed his freshman season in 2017 after experiencing arm pain in the fall. Instead of taking the mound for the Rockets that year, he underwent physical therapy to try and relieve some of the pain in his bicep and shoulder.

He came back as a sophomore in the fall and was looking to work past the injury issues that plagued him the year before. But his arm wasn’t feeling any better. He was still experiencing discomfort even after months of physical therapy. An MRI revealed that he had a partially torn labrum. Once again, his season was over before it began.

“It was probably one of the hardest things I have been through,” Scoles said.

By the start of Scoles’ junior season, it appeared that the physical therapy had paid off. That fall, Scoles was throwing again without pain for first time in years. He was on track to be ready for the 2019 season when, again, the pain in his biceps and shoulder reappeared. 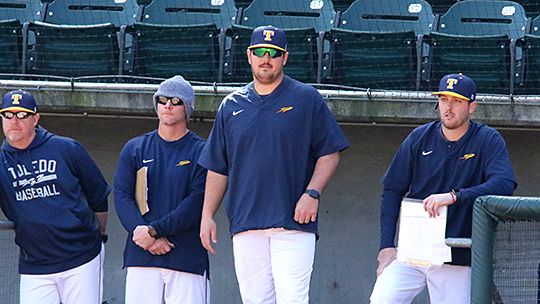 Caleb Scoles, third from left, was a student assistant coach for the Rockets in 2020 after
spending three years on the roster as a pitcher.

This time there was no avoiding it; Scoles underwent surgery to repair his labrum and bicep tendon that spring, wiping out his 2019 season. It was the third straight year he missed due to injury, and it would end up being his last season as a Toledo baseball player. He ended his career having never appeared in a game for the Rockets as a player.

“Despite the surgery and extensive rehab efforts, my arm didn’t heal the way I hoped it would,” Scoles said. “I was very fortunate that I had teammates around who supported me. Even though I didn’t see time on the field as a player, I made the most of being a part of the team during games and practices.”

Entering his senior year and the 2020 baseball season, Scoles was presented with an opportunity to continue his baseball career in a different capacity. Instead of being on the roster as a player, he could serve as a student assistant coach.

“When I was hired last summer, one of the first things I did was call all the players on the current team,” Head Coach Rob Reinstetle said. “I talked to Caleb, and he gave me some insight into the arm struggles he’d had during his time at Toledo. He said that he loved Toledo baseball, but didn’t feel he could pitch anymore. We talked about his options and had the idea of him being a student assistant coach.”

For Scoles, the decision was a no-brainer.

“It was a simple decision for me because I loved all of my teammates, and I love the game of baseball,” he said. “I knew that I would have really missed everything if I said no.”

So, for the 2020 season, Scoles played an important role on the Rockets’ coaching staff. He served as the team’s first base coach and helped relay signals from the dugout when Toledo was pitching.

“My favorite part of being a coach was getting to travel with the team across the country and getting to play great competition,” Scoles said of his coaching stint with the Rockets this past spring. “I also couldn’t complain about being at the baseball field every day. I thoroughly enjoyed my time being a coach.”

“He proved to be a very valuable member of my staff,” Reinstetle said. “He was a great leader and had the respect of the team. He worked daily with the pitchers and took on just about every task we threw his way.”

Of course, for Scoles and the rest of the Rockets, this past season was cut short due to the coronavirus pandemic. After returning with the baseball team from its spring break trip in March, Scoles stayed in Toledo for a couple weeks before heading back to his parents’ house in Michigan.

Scoles is set to graduate this weekend with a degree in marketing and professional sales. He has a sales job lined up that will begin in July. With his college career winding down, he is able to reflect on the time he spent at The University of Toledo and how it prepared him for life after college.