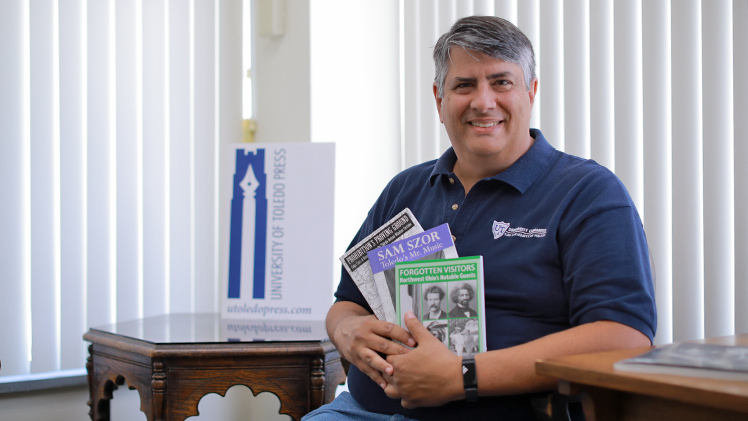 Each author will receive a check for $300 plus a plaque, and all have been invited to discuss their books at BGSU in the fall.

“That the Center for Archival Collections chose to recognize all three of these books is a testament to the quality of the authors the Press partners with and the quality of their research and writing,” said Yarko Kuk, managing editor of UToledo Press, which is a division of University Libraries. “Working with Joe, Judy and Tedd was a joy. They come from entirely different backgrounds.

Kuk said it was the first time UToledo Press has taken top honors in both categories and, to the best of his knowledge, it’s the first time the Local History Publication Awards have awarded two top prizes in a single category.

The awards were established in 1993.

Just as almost every business operation was affected by the pandemic, Kuk said UToledo Press was forced to quickly adapt its operations to the unforeseen and significant changes, as projects at various stages of development “ground to a halt.”

“In the summer of 2020, as we started to strategize about how we could continue our mission of documenting and celebrating our region’s rich history, culture and people, we readjusted our production schedule and were able to publish five books in just six months,” he said. “It was a monumental task, but the finished products are some exceptional reads.”

Beau Case, dean of University Libraries, noted that UToledo Press is having its best year ever, despite these challenges.

“Manuscript submissions, titles produced and sales all are having record years. And now these awards! I am so happy for our amazing authors. And, for the Press, these awards validate our credibility and impact as a publisher.”

Over the years the UToledo Press has won several other Local History Publication Awards from BGSU:

•  2018, Independent Scholar for “Caps, Capes, and Caring: The Legacy of Diploma Nursing Schools in Toledo”;

•  2016, Independent Scholar (Honorable Mention) for “Hindsight: Northwest Ohio Through the Lens of Time”;

•  2012, Academic Scholar for “From Institutions to Independence: A History of People with Disabilities in Northwest Ohio”;

Kuk said that books with a local history bent have been an important part of the UToledo Press catalog over the years.

“Even now we are in the final phases of production on our first chapter book ‘Hinges,’ which is about the Underground Railroad in Maumee, and the key roles played by African Americans and Native Americans. We are also putting the finishing touches on a book about year-round living on Kelleys Island.”