Like many college students, Bryce Harris arrived on campus as a freshman looking for some guidance.

A scholarship football player, Harris had all the help he needed from the Rocket coaching staff. There was no issue there. But on the academic side, he had no idea what to major in, or beyond that, what he would like to pursue as a career after football. He only knew one thing for sure: He liked working with young people. 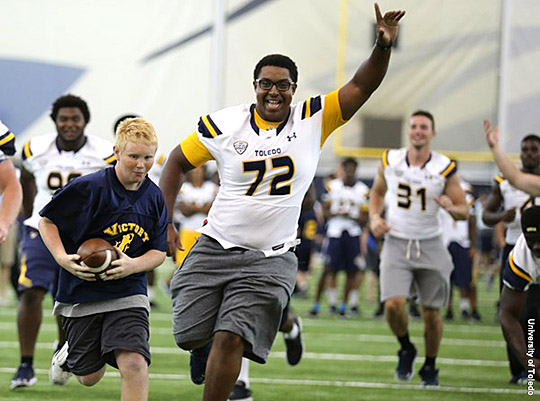 Bryce Harris ran with a youngster at Victory Day in 2016.

An introductory career class and some assistance from a UToledo success coach helped send him in the right direction.

The class was Career and Self-Evaluation, taught by DeMya Wimberley, who also became Harris’ success coach. By his sophomore year, Harris had his direction — school counseling.

“DeMya helped me find my academic niche and my career field,” said Harris, the Rockets’ starting center. “My goals in life centered around helping people. I just needed to find a career that would allow me to do that.”

Winberley said Harris possessed all the tools for success before he came to college. He just needed a little nudge.

“I saw right away that Bryce had a maturity about him. He had a focus. He just needed direction,” said Wimberley, who is a program manager for the Center for Success Coaching. “My class helps students learn more about themselves. Sometimes you need to learn a little more about yourself before you can choose a career path.”

While the time commitment of being a student-athlete can pose its challenges, for Harris it has provided an opportunity he might not otherwise have had.

“My home life was very stable growing up, but in reality, I’m not sure I would have even gone to college right out of high school if it wasn’t for football,” said Harris, who attended Firestone High School in Akron. “It would have been a bit tough financially. I probably would have worked for a few years and then maybe pursued it later in life.”

In addition, the circumstances of his athletic career have made it possible for him to finish six years of higher education while on an athletic scholarship. After sitting out his first season as a redshirt in 2015, Harris moved his way into the starting lineup the following season. He became a stalwart on the offensive line, earning second-team All-Mid-American Conference honors as a junior in 2018. However, off-season surgery forced him to sit out the 2019 season, while the Coronavirus pandemic has put the 2020 season on hold. With his athletic career delayed, Harris has forged ahead on his academic journey. A two-time Academic All-MAC honoree, Harris gained the opportunity to earn not one, but two degrees during his playing career as a Rocket. 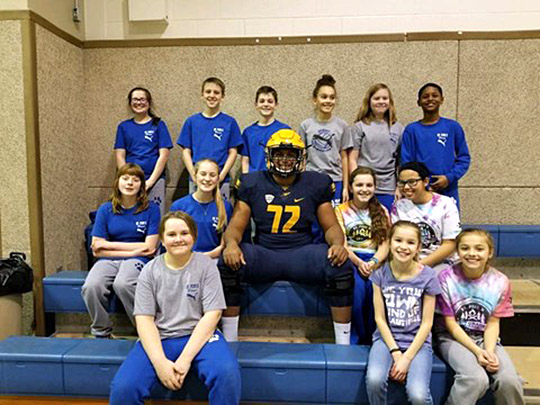 “Bryce is someone who has always maximized his ability and potential in everything he does, both on and off the field,” said Toledo Head Football Coach Jason Candle. “He’s a mature young man who has really grasped the concept of what it means to be a student-athlete. It takes a special person to be in a position to earn two degrees while playing college football. It says a lot about his parents, too. They have been supporting him through every step of the way.”

Harris said the highlight of his academic experience thus far has been an externship at St. Pius X Catholic School in Toledo. There, he worked with students in a classroom, helping them with their assignments, but also getting to know them as individuals, listening to their problems, and offering guidance. He was required to work 60 hours in the program, but enjoyed it so much he volunteered for an additional 60 hours. He also participated in an after-school program there, spending time with students until their parents or guardians were able to pick them up. For Harris, the experience fit perfectly with his goal to help others. It’s something he does in his spare time as well.

“My parents always taught me that if you’re in a position to help others, do it,” Harris said. “I’ve been doing some type of volunteer work since my freshman year of high school back in Akron. So coming to Toledo and participating in all of the volunteer opportunities they provide for us in the football program has always been a no-brainer for me to sign up. I love working with the youth, or anyone in need. Seeing a smile on someone’s face is all I need to brighten my day.”

Harris’ life away from football is on a pretty clear path right now. He has two more semesters left to finish before he receives his master’s degree in May. He also got married during spring break last March to his high school sweetheart, Janelle Perry, a former track and field star at both Ursuline College and Central Michigan University.

What is somewhat less certain is his future on the gridiron. Like all his teammates, Harris is hopeful that there will be a spring football season so he can wear the Midnight Blue and Gold one last time. There is also more at stake than just school pride for Harris, who is a candidate for the Rimington Award as the nation’s best center and the Outland Trophy as the country’s top down lineman. Another good season also could improve his prospects for a potential NFL career, especially since he has not played football in almost two years.

“I’ve been playing football since I was 8 years old and all that time I’ve dreamed of playing in the NFL,” Harris said. “I worked hard to get an athletic scholarship so I could get my college degree and get a chance to play in the NFL. Hopefully, I can do both.”