Professor Emerita to be Honored by French Government

Dr. Ruth A. Hottell will be inducted into the French Republic’s prestigious Ordre des Palmes Académiques (Order of the French Academic Palms) at the grade of chevalier (knight).

An official ceremony to mark the honor was postponed due to the pandemic, but is expected to be rescheduled.

The French Academic Palms recognize those who have rendered eminent service to French education and have contributed to the prestige of French culture. This esteemed distinction awarded by the Prime Minister of France, upon the recommendation of the Minister of Education, acknowledges educators’ merits, talents and exemplary activities. 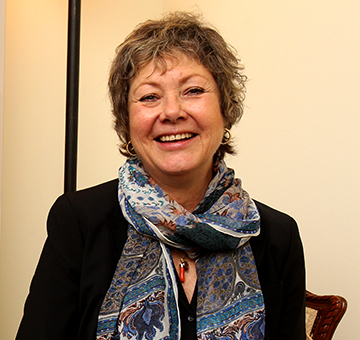 “I am so thrilled to receive this award from the French Government; it is significant that the nomination began with the French Consul General to the Midwest. Traveling throughout the region, he has witnessed our dedication to expanding appreciation for French language and culture through our teaching, research and community service,” Hottell, professor emerita of French, said.

Napoleon founded the French Academic Palms in 1808 to honor educators; it is the oldest non-military French decoration. This distinction was initially awarded to outstanding members of the university community and today recognizes the significant contributions of faculty members through their teaching, scholarship and leadership over the course of their careers.

“Dr. Ruth Hottell has dedicated her life to French education and research,” said Dr. Linda M. Rouillard, professor of French and chair of the World Languages and Cultures Department. “She is an expert on French cinema, a topic she has written about and given presentations on for decades.”

During her career, she taught and conducted research in France, and led several study abroad programs to the European country she loves. Hottell’s research focuses on French cinema; she has written numerous articles on Francophone women directors and is working on a book about Agnès Varda’s works. She has co-authored books, including “French-Speaking Women Filmmakers” and “Francophone Women Documentarians.” She continues to coordinate a French film series for the French Program at The University of Toledo and the Alliance Française de Toledo.

Hottell is a member of the American Association of Teachers of French, Society of Cinema and Media Studies, Women in French, Modern Language Association, and the American Council on the Teaching of Foreign Languages.

“To accompany my students in their acquisition of French language and cultural competence has been one of the most rewarding experiences in my life,” Hottell said. “I am grateful for the support of my students, colleagues, friends and family as I pursued my passions and goals.”