Education is one of the most viable, stable paths to success in the United States. Even as the global economy changes, education remains a consistent indicator of future prosperity as well as a key stepping stone to increased opportunity.

For UToledo Ph.D. candidate Quatez Scott, education represents something much more simple: freedom. Pursuing his doctorate in educational theory and social foundations, Scott says it’s become clear that above all else, education is freeing. 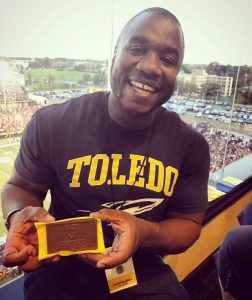 “Education really is supposed to be a liberating experience, and the more that I’ve become aware and reflective of everything that I’ve learned within the program, I’ve been able to liberate myself a lot more from the things that I see within our society,” he said.

Those things include racial prejudice and injustice, something Scott has studied closely as a part of his Ph.D. program, especially as they pertain to political movements concerning social justice. He’s closely studying ongoing protests over police violence, and he’s working to position future students to take part in those conversations.

“It’s really important to teach students not just to observe what is going on with the movements, but with our society. Social conditions lead to social movements. It’s important for all of us to identify injustice, reflect on it, and take steps to move forward.”

A former foster child, Scott knows the value of education — and of others being committed to his success. That’s why he’s plotting a career path that will allow him to help others improve their educational circumstances.

“I’ve had a lot of people who have invested not just financially in my education, but spiritually and emotionally in everything that I’ve been doing,” he said. “And when things get hard and tough, being able to speak with those people who’ve been working so hard to get me to this place, they’ve kept me really grounded.”

Even prior to finishing his Ph.D., Scott is already achieving his goal, shaping the future of education while embarking on his own educational journey. Cyndee Gruden, UToledo’s vice provost for academic administration and faculty affairs, says Scott’s commitment to educational freedom while maintaining his own unique viewpoint is admirable, a model future students should emulate.

“Quatez is a shining example of the value of being your authentic self in pursuit of his Ph.D.,” she said. “His personal and educational journey has been one marked with adversity and grit. He has sought and embraced each opportunity presented to him while staying true to and being grounded in his identity.”

Scott will finish his program in the summer or fall of 2021. He’s not completely sure yet, where he’d like to go with his post-UToledo career, but he has some ideas. If education is freedom, he wants to share that freedom with as many people as he can.

“Long term I would like to go into consulting and working with organizations and businesses all over, not just confining myself to educational settings,” he said. “At the basis of it, it’s an education degree, but it’s all about the same conversations. It’s about how are we becoming more educated within all of these.”