A record-tying best three-time WNBA Coach of the Year, Thibault is the league’s all-time winningest coach. Thibault and the Mystics recently finished the regular season with the best record in the East, were the top seed in the WNBA Playoffs, and won the WNBA Championship by defeating the Connecticut Sun. It is the first championship in Washington’s franchise history. 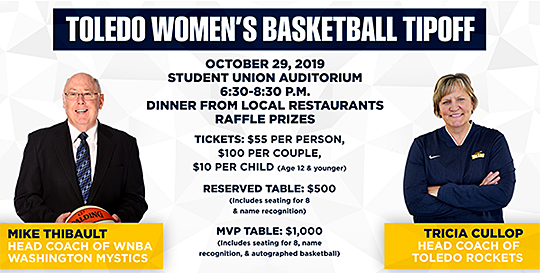 “We’re thrilled to have such an exceptional coach join us at our event,” Toledo Head Coach Tricia Cullop said. “Mike is one of the best in the business. We feel very honored to have Mike spend the evening with our fans and program.”

The cost to attend the fundraiser is $55 per person, $100 per couple and $10 per child (age 12 and younger) with all proceeds going to the women’s basketball program.

Attendees also can purchase an eight-person table for $500 or reserve the MVP package for $1,000, which includes a reserved table for eight and a signed Toledo basketball.

Attendees will eat food donated by local restaurants while vying for numerous prizes throughout the course of the event.

For more information or to reserve your spot/table for the event, contact Director of Operations Lauren Flaum at 419.530.2363 or lauren.flaum2@utoledo.edu. RSVPs are request by Tuesday, Oct. 22.