The University of Toledo women’s soccer team has earned the Team Academic Award from the United Soccer Coaches for the 2018-19 academic year after ranking ninth among NCAA Division I programs.

A total of 995 college teams (346 men, 649 women) earned the Team Academic Award, including 258 schools that had both their men’s and women’s programs among the recipients. 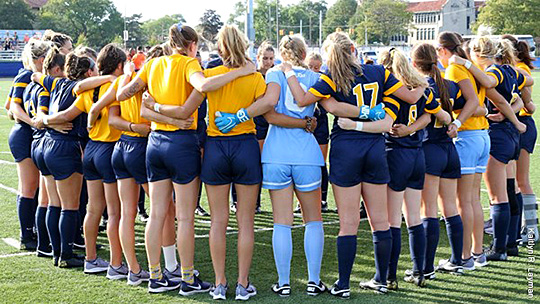 The Rockets posted a 3.71 grade-point average last year, tying for 14th among all NCAA schools. Nine athletes earned a 3.40 GPA or higher, while Lexa Bauer and Betsy Lueck each earned a 4.00.

Toledo was one of two Mid-American Conference schools to earn the Team Academic Award from the United Soccer Coaches. Western Michigan University tied for 20th in Division I and 30th in the country.

United Soccer Coaches annually celebrates the academic achievements of high school and college soccer teams whose student-athletes collectively demonstrate a commitment to excellence in their studies over a course of a full school year.

College Team Academic Award recipients are active members of the United Soccer Coaches College Services Program with a composite grade-point average of 3.00 or better on a 4.00 scale for all players on the roster.