Birdel Jackson, III, P.E., a University of Toledo civil engineering graduate and former president of the UToledo Alumni Association, was named a Fellow of the American Society of Civil Engineers (ASCE), the nation’s oldest engineering society.

Jackson, who is a national member of the UToledo Board of Trustees, has received plaudits throughout his distinguished career, including being named UT’s 2001’s Civil Engineer of the Year and as the recipient of UT’s Blue and Gold “T” awards. But recognition from his professional peers is particularly special, he said. 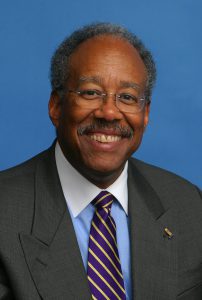 “It’s really a reward for all the hard work that I have put in, from the time I enrolled in the program in the Civil Engineering Department at The University of Toledo until now,” said Jackson, who lives in Atlanta and also serves on UToledo’s College of Engineering Visiting Advisory Board and the Department of Civil & Environmental Engineering’s Industrial Advisory Board. “It’s kind of a capstone.”

Jackson, who also earned a master’s degree in civil engineering from Georgia Tech and is an emeritus member of the Civil Engineering Advisory Board and the Academy of Distinguished Engineering Graduates, is a registered professional engineer in Georgia, Ohio and South Carolina. In addition to his status as Fellow of the American Society of Civil Engineers, Jackson also is a member of the National Organization of Minority Architects and National Technical Association and has been named Entrepreneur of the Year by the National Society of Black Engineers.

Jackson credits friends, mentors Ted Parr and Professors David Colony, Ed Saxer and Dean Zmeskal, and other civil engineers for helping him reach professional heights, operate a successful consulting practice and overcome career obstacles, including those that were race-related. “I didn’t do it by myself,” he said.

Dr. Mike Toole, a Fellow of the American Society of Civil Engineers who met Jackson in fall 2017 when he became UToledo’s dean of the College of Engineering, enthusiastically endorsed Jackson for the ASCE honor.

“Mr. Jackson has made tremendous contributions to our profession over his long and highly successful career,” Toole said. “There is no doubt in my mind that Mr. Jackson would deserve to be granted Fellow status even if he was a white man. The fact that he achieved all that he did despite the constant barriers he faced as a man of color makes him doubly worthy of being named an ASCE Fellow.”