Doing a Little Bit of Everything Opens Doors for Bioengineering Student

Looking for opportunities wherever they might arise has always appealed to Anjali Phadke. In fact, it’s what sparked her interest in The University of Toledo in the first place.

The Dayton, Ohio, native had been looking for college programs that could eventually lead her to medical school when she stumbled upon UToledo’s BACC2MD Program. Given her existing interest in bioengineering, it seemed like a natural fit, especially since Toledo gave her the opportunity to put what she learned into action right away.

“I noticed that Toledo was one of only two in the state that had the mandatory co-op program,” she said. “And I found that very interesting.” 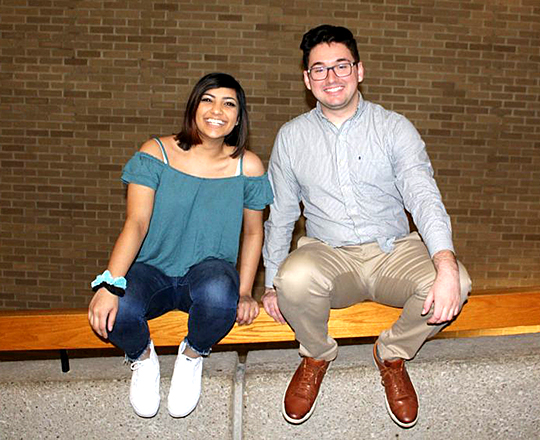 A bioengineering degree and a high-profile co-op would be a big enough platform to launch a career, especially for a student who is headed to medical school in the future. But Phadke hasn’t stopped there. She is also UToledo’s Student Government vice president, a position that caps off a rapid rise through the ranks.

As the legislative secretary, which she was immediately elected to when she joined Student Government in spring 2019, Phadke worked to pass legislation giving students more access to sharps containers, a crucially important feature for students with conditions such as diabetes. These students regularly need to dispose of needles but didn’t have consistent access to a safe place to do so.

“I knew of some students who used sharps for medical reasons who just kept them in their pockets because there were no public sharps containers made available,” she said.

After a successful stint in her legislative secretary role, Phadke and running mate Nick Thompson, now president, took on their leadership roles within Student Government. They’re working to shepherd the student body through unprecedented times, not just on the UToledo campus but throughout the country.

“Her commitment to diversity, equity and inclusion is remarkable,” said Dr. Phillip “Flapp” Cockrell, UToledo vice president for student affairs and vice provost. “Following the death of George Floyd, Anjali met with her peers highlighting the need to support Black/brown students, faculty and staff. She participated in the University’s first Dialogue on Diversity series where she led a moment of silence for those individuals who died in the hands of police.”

Phadke said her commitment to social justice and her corresponding work in Student Government just represent more opportunities for her to do what she truly loves: helping people.

“I am the least political person you’ll meet. I strongly dislike politics,” she said. “Now I’m willing, happily, to deal with politics as long as I’m getting to help students.”

And for a student committed to maximizing her college experience however she can — from co-ops to Student Government to serving as a Presidential Ambassador to joining a sorority — opportunity should never be in short supply.