The University of Toledo received a Graduation Success Rate (GSR) of 92% for its athletic department in the latest figures released by the NCAA. That figure ranks second among the 12 schools in the Mid-American Conference, just 1% behind Miami University’s score of 93 percent. 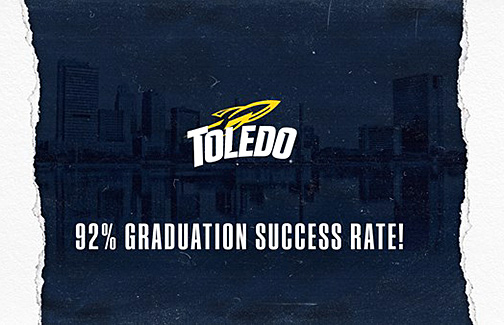 “These latest GSR figures confirm something that we already knew: Our student-athletes are graduating in very high numbers,” said UToledo Vice President and Athletic Director Mike O’Brien. “A record 77 Rocket student-athletes received their diplomas at commencement last spring, which was a very gratifying accomplishment. There is no prouder moment for student-athletes, as well as their families and all who have supported them on their journey, than when they walk across that stage and receive their diploma.”

GSR is a gauge of every team’s graduation rate within a six-year period of a student-athlete’s enrollment. The latest GSR figures examined the student-athlete cohort that originally enrolled in 2012 and would need to have graduated by August 2018 to count as a graduate.

The GSR formula, intended to be a more complete and accurate look at student-athlete success, removes from the rate student-athletes who leave school while academically eligible and includes student-athletes who transfer to a school after initially enrolling elsewhere. The GSR also allows for a deeper understanding of graduation success in individual sports than the federal metric, which has broader groupings.