Growing up in Rochester Hills, Mich., the University of Toledo senior guard was coached by his father, David, on the Amateur Athletic Union (AAU) circuit. As a youngster, he learned more about the game watching his two older brothers compete. He used that upbringing to develop into one of Michigan’s best players, finishing third in the state’s Mr. Basketball voting in 2016.

Since arriving on the UToledo campus three seasons ago after playing one year at Duquesne University, Littleson has excelled in the classroom while developing into a key contributor for the Rockets. 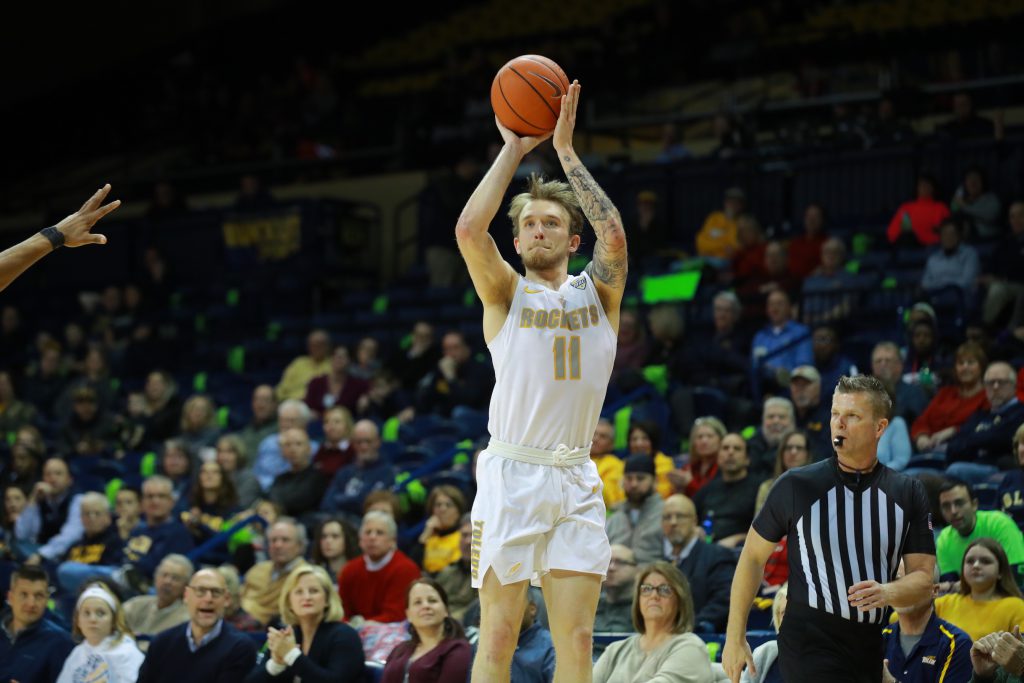 Senior Spencer Littleson is preparing for a coaching career once his playing days are over. “I love being in the gym and want to be someone who’s giving and not taking.”

Now with the end of his Rocket career approaching next spring, he is preparing to join the coaching profession at the collegiate level.

“Coaching is something I’ve wanted to do since I was a freshman in high school and I’m passionate about it,” said Littleson, who has received a little taste of coaching at summer basketball camps at Toledo and in high school. “I love being in the gym and want to be someone who’s giving and not taking.”

He took notice of the benevolent attitude from his coaches, beginning with his father. Littleson appreciated them going out of their way to help him and credits them with providing him the impetus to coach.

“I’ve always looked up to my dad as a big role model in my life, and his approach is something I want to follow,” he said. “Some of the most influential people in my life have been coaches and I want to be able to make a similar impact on someone else’s life.”

Littleson is going to have a chance to do just that thanks to the education he’s received from playing the sport he loves. He received his degree in marketing last spring despite losing 12 credit hours following his transfer from Duquesne.

“Getting my degree in four years definitely gave me a really big sense of accomplishment,” Littleson said. “It was always something I dreamed about growing up. It was great for me to go to college, get a scholarship and make my family proud.”

Now the two-time Academic All-MAC selection with a 3.371 grade-point average has set his sights on earning a master of business administration degree with a focus on leadership.

“I think getting an M.B.A. is going to be a great opportunity to learn how to run an organization because coaching is like a business,” Littleson said. “Coaches need to know how to be a fundraiser. Learning how to run a corporation from top to bottom is also big for me. I thought it would not only make me a better person and leader but show me ways to motivate my staff and team I’m going to be coaching.”

He believes there is a way he can utilize topics he’s learned in his undergraduate marketing classes as well.

“There’s a lot of ideas I have learned about branding that can benefit me,” Littleson said. “A big part of recruiting is marketing. I think my creativity and knowing how to execute a marketing plan can help attract student-athletes.”

Head Coach Tod Kowalczyk believes Littleson has all the makings of a successful coach and that the preparation he’s doing now will pay off.

“I think Spencer will be a very good coach and he’s doing it the right way,” Kowalczyk said. “He loves to compete and the biggest reason I think he’ll be successful is that he’s in it for the right reasons. He wants to help young men grow and get better.”

“He sees the game and understands the concepts we are trying to do,” he said. “We’ve had lot of philosophical discussions of what we do and why we do it.”

The origins of Littleson’s desire to learn more about the game and ask questions came from discussions he’s had with his father.

“Something me and my dad talked about is keeping a notebook of drills for workouts that I like so I can use them when I become a coach,” he said. “I go home and write them down because I’m not going to remember every drill that I’ve done. I’ve seen a lot of different styles of workouts and coaching, and I’ve learned what works and what doesn’t.”

And that’s something that will serve Littleson well as he continues to learn about the game — and business — of basketball.