A senior from University Hills, Pa., Kleespies is a two-sport athlete for the Rockets, playing volleyball in the fall and competing on the track & field team during the winter and spring. In the classroom, she is on track to graduate this spring with a bachelor’s degree in biology, carrying a robust 3.46 cumulative grade point average. Her professional goal is to become a physician assistant, preferably in an endocrinologist’s office.

Being a two-sport athlete while pursuing a challenging major is a feat in itself, but what motivates Kleespies is perhaps the most impressive part of her journey. 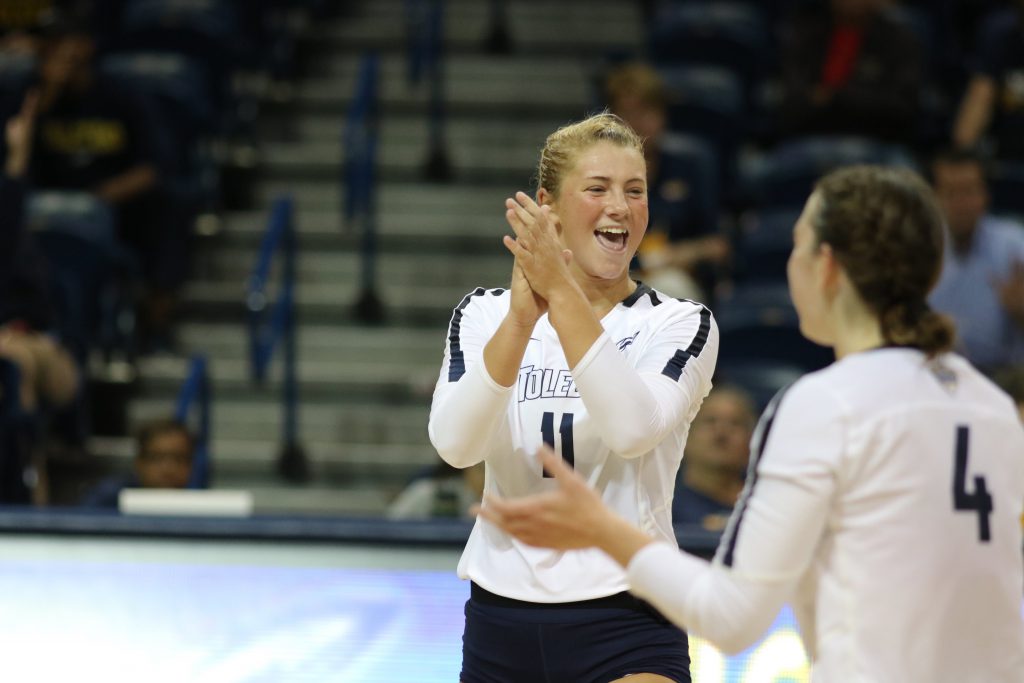 Chloee Kleespies, a two-sport Rocket athlete playing volleyball in the fall and competing on the track & field team during the winter and spring, was diagnosed with Type 1 diabetes in 2014. She plans to work as a physician assistant in an endocrinology office helping young people with diabetes.

Kleespies was diagnosed with Type 1 diabetes in the spring of 2014. As a freshman in high school, she was competing in club volleyball and playing basketball, so it wasn’t initially a surprise to her that she rapidly lost about 20 pounds. Between practices and games, she was constantly on the move. She chalked it up to her high activity level. But she was experiencing other symptoms that were much more troubling: blurred vision, dizziness, nausea, dry mouth. She went to the doctor, where the first question was whether diabetes ran in her family. She told them her grandmother and a cousin were both diabetic.

“I had to go to the emergency room right away,” she said. “I went to the Children’s Hospital of Philadelphia where they immediately started me on fluids and gave me insulin to get my numbers down. I kept asking my doctors how this would affect my life. They said if I managed it right, it shouldn’t slow me down.”

It’s safe to say Kleespies has won that battle. Since arriving at Toledo in 2016, she has appeared in 74 matches and averaged 2.7 kills/set as a Rocket on the volleyball court. She also competed at the 2020 Mid-American Conference Indoor Track & Field Championships this past spring.

To properly manage her diabetes, Kleespies checks her blood sugar every day when she wakes up, then before and after each meal. She needs to monitor her levels even closer during practices and games, or any time she is being more physically active.

“It is important to eat right and make sure I always have my supplies on me,” Kleespies said. “I carry a purse with me at all times that holds fruit snacks in case my numbers go low, my glucose meter, a pricker and test strips, an extra battery for my pump, infusion sets and reservoirs.”

Since she has been away from home, Kleespies has relied on the support of the UToledo sports medicine staff, especially assistant athletic trainer Mackenzie Haines.

“Chloee is one of the most resilient athletes that I have had the privilege of working with,” said Haines, who works with the volleyball program. “Although she faces many obstacles uncommon for the traditional student-athlete, she always finds a way to thrive in her sports.”

One day, Kleespies would like to use her experience to help other young athletes who are also Type 1 diabetics. After being a patient for several years, she would like to be on the other side of the equation as a physician assistant.

“Since being diagnosed, I mostly see physician assistants instead of an actual doctor,” Kleespies said. “Out of those PAs, my favorites have been the ones that have diabetes. They always seem more personal and give more realistic advice on problems or questions that I have.”

Obtaining her bachelor’s degree this spring is the first step towards her ultimate goal of working in an endocrinology office. She will eventually need to earn a master’s degree from an ARC-PA accredited program, then pass the Physician Assistant National Certifying Exam before she can obtain her license and start working in her desired field.

In the meantime, Kleespies finds other ways to help her fellow athletes with diabetes. For instance, she is on a group chat with several other college volleyball players with diabetes.

“It helps to know that there are other people out there struggling with the same things you are. That way, you don’t feel alone,” Kleespies said. “In the group chat, we will message each other questions we have, ask advice on problems we are having or just encourage each other to keep pushing through it.”

Kleespies envisions herself sharing her experience with kids who have been diagnosed with Type 1 diabetes and helping them develop good habits to help manage their condition.

And if they have any concerns about how their life will be affected by their diabetes, Kleespies can serve as the perfect example that if you take good care of yourself, you don’t have to let it slow you down.