The Upward Bound program at The University of Toledo launched a magazine and chose a music theme for its premiere issue, offering personal reflections and critiques on music’s innate ability to move us, influence us and bring us together.

And to celebrate the magazine’s arrival, Upward Bound is having a release party Saturday, Oct. 30, which also will serve as a welcoming event for returning program participants, new students in the program as well as the campus and area community. 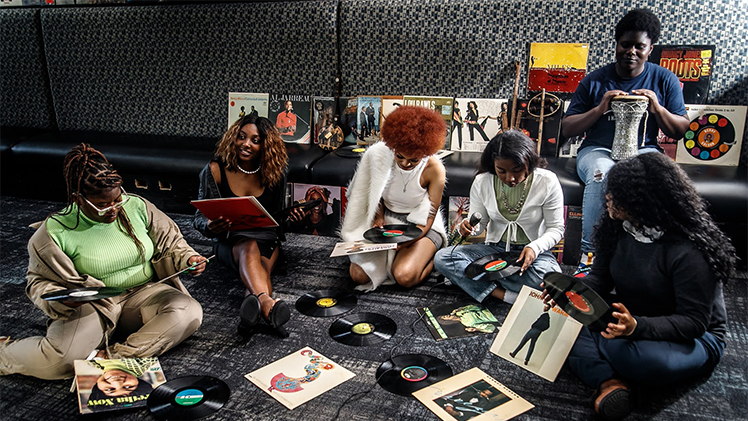 Upward Bound students developed content for the program’s new magazine over the summer, with their reflections and critiques based on the singular theme: music.

“We believe our program, having been around since 1967, has made a significant impact in the lives of not only its students but, from a peripheral sense, other communities who face systemic challenges in terms of seeking higher education and completing it,” said Jon-Jama Scott, academic advisor in the Division of Student Affairs and for the Upward Bound and Upward Bound Math Science programs.

“Our program serves first-generation and low-income and other challenged demographics. We support them in their intellectual, educational and cultural endeavors. That’s what we do, that’s what we believe this magazine has attempted to approach and that’s what this event is there to both acknowledge and celebrate.”

Funded by the U.S. Department of Education, Upward Bound is a college preparatory program for motivated high school students in the city of Toledo that includes a six-week summer college academic experience, exposes students to colleges and career awareness and develops leadership skills.

While the program has been at UToledo for more than 50 years, Scott said no one can recall Upward Bound having produced a periodical.

He decided that needed to change.

“As a writer, as someone who respects the craft of journalism, who respects the need to preserve both cultural and historical artifacts, who values the skill of communication, I thought it was a charge of mine to try and stimulate an interest in those activities amongst our students,” Scott said.

Last summer during COVID, he said the students put together content for the stories during their six-week summer program. That was just the beginning.

“There was a lot of work to do after students submitted their writing: editing, layouts, graphic design and printing,” Scott said. “Students took part in the post-production processes much more this summer.”

The music issue began in June and went to print on Tuesday.

As for the choice of its theme, music is meant to represent more than songs, but art and the human experience.

“We believe that is one the purest, safest, most beautiful vehicles to be able to relate to one another as human beings and to be able to improve our lived conditions,” Scott said. “Every story in there in some form or fashion is there to investigate and to interrogate, in some cases, these living conditions that we are all existing in. We feel like that is useful.”

And now that Upward Bound’s magazine is official, there’s “no turning back,” Scott said.

“That’s certainly what my colleagues felt. ‘Well, you’ve got to do another one. This is a thing for us now.’ Personally, I’m all for it. I like to research and write. And because this program is an educational support system, you’re building skills in students and also building a sense of awareness and responsibility for them to contribute to improving individuals and the people who are around them.

For more information about Upward Bound, visit the program website.