A nonprofit started by a University of Toledo student earlier this year has already delivered more than 1,000 pounds of food to people in need.

“When it comes to food, most of us tend to take it for granted,” said Boddapati, a bioengineering senior in the Bacc2MD program who plans to start medical school in the UToledo College of Medicine and Life Science after graduation. “As long as we have food on the table, we are good for the day; however, that is not the case everywhere in the world. Thousands of families suffer from malnourishment every single day, and at the same time, we have thousands of pounds of food being thrown away every day. This is the inefficiency.

“I am a spiritual individual and I believe the highest form of service is that of giving food to those who lack it,” Boddapati added. “This is how GJ-Alleviating Hunger & Food Waste was born.” 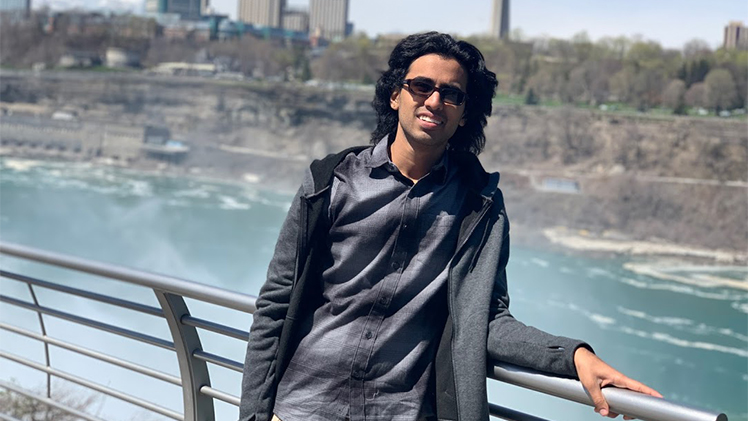 The journey to success of GJ-Alleviating Hunger & Food Waste is much like Boddapati’s own at UToledo.

He arrived on campus in 2017 as a recent high school graduate who mostly kept to himself and was involved in only a few extracurricular activities.

“I knew that mentality simply wouldn’t work. I was not only new to the state of Ohio, but I was new to the campus. I didn’t know anybody,” said Boddapati,. “I needed to change, to interact with as wide a range of people as possible, and to get involved in as many organizations as possible to build my skill set and experiences and build a name for myself.”

Since then he has joined or worked with nearly 20 university and national organizations, including as a former Student Government senator, a member of the College of Engineering Student Advisory Board, and the Campus Recruitment and Membership Director of the Golden Key Organization. He also founded and served as president of HOSA Future Health Professionals.

That kind of determination was instrumental in Boddapati overcoming a few obstacles to realize his dream of launching GJ-Alleviating Hunger & Food Waste in and around his home in Northville, Mich.

After some failed attempts to secure funding during the launch, GJ-Alleviating Hunger & Food Waste’s Board of Directors, which includes vice president and fellow UToledo student Madhu Ramireddy, reached out to organizations and businesses and received support from the African People’s Association and Punjabi Student Association, both of which are UToledo organizations.

Boddapati’s nonprofit filed with the IRS and the strategy shifted once it received its tax-exempt status this spring.

“We began to reach out to more food providers,” he said. “On June 15, our first provider, Dunkin’ in Plymouth, Mich., was approved, and on June 25, our Panera food provider in Livonia, Mich., was also approved. And on June 28, I conducted our first collection: 8-dozen donuts from Dunkin’ to the Salvation Army in Farmington, Mich.”

“In our first month of operations we aided in the transfer of 59-dozen donuts and 70 pounds of bread to our food storage areas: the Salvation Army of Farmington Hills, Mich., and Aunt Na’s Village in Detroit,” Boddapati added. “We also adopted a road through the Road Commission of Oakland County in Michigan.”

He has plans to expand his Michigan-based nonprofit into Toledo. For those interested in supporting GJ-Alleviating Hunger & Food Waste can connect with the nonprofit through its Facebook page, facebook.com/GJFoodNetwork.

“Helping others is a manifestation of humanity,” he said. “And that is what I hope to do through GJ-Alleviating Hunger & Food Waste.”