The University of Toledo received a Graduation Success Rate (GSR) of 92 percent for its athletic department in the latest figures released by the NCAA. That figure ranks second among the 12 schools in the Mid-American Conference, trailing only Miami University’s score of 95 percent.

This is the second straight year that the Rockets achieved a GSR of 92 percent, and also the second consecutive year in which UToledo ranked second among MAC schools. 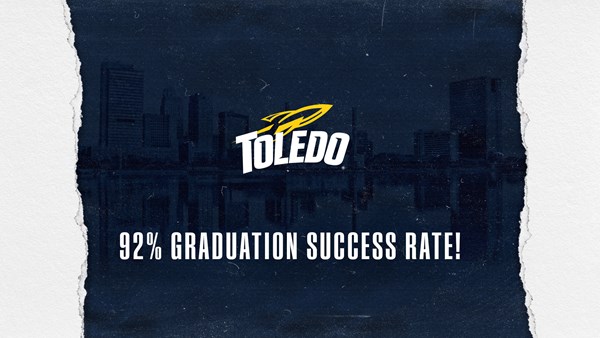 “We are very proud of our latest GSR figures as they are a very strong indicator that our student-athletes are graduating at a very high rate,” said University of Toledo Vice President and Athletic Director Mike O’Brien. “Over the past two years, 135 Rockets have graduated from The University of Toledo. That is a great achievement for our program, as well as for each of our graduating student-athletes and their families.”

GSR is a gauge of every team’s graduation rate within a six-year period of a student-athlete’s enrollment. The latest GSR figures examined the student-athlete cohort that originally enrolled in 2013 and would need to have graduated by August 2019 to count as a graduate.

The GSR formula, intended to be a complete and accurate look at student-athlete success, removes from the rate student-athletes who leave school while academically eligible and includes student-athletes who transfer to a school after initially enrolling elsewhere. The GSR also allows for a deeper understanding of graduation success in individual sports than the federal metric, which has broader groupings.