A professional Chicago actor’s ability to bring characters to life on stage is stronger thanks to a team of engineering students at The University of Toledo.

As their senior design project, the engineering team of Cassandra Brown, Brandon Payeff, Adam Pusateri and Nicholas Wryst created a way for Joel Rodriguez, who has muscular dystrophy and uses a wheelchair, to more expressively conduct his arms by leveraging the full set of physical motion he possesses. 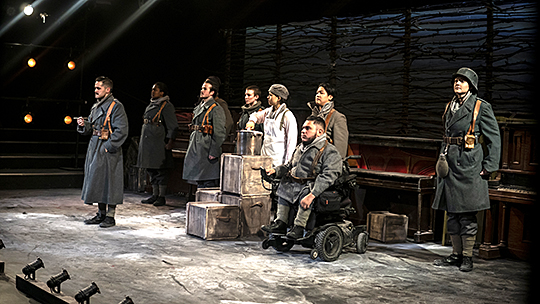 Joel Rodriguez performed on stage earlier this year at the Greenhouse Theater Center in Chicago during a performance of “All Quiet on the Western Front.” A team of UToledo engineering students designed a way for the actor, who has muscular dystrophy and uses a wheelchair, to be more expressive on stage.

“Our medical device was designed for the stage, but also to make Joel’s everyday life a lot easier when it comes to assisting his arm movement,” said Payeff, who is graduating this month with a bachelor’s degree in mechanical engineering and starting a full-time job at Marathon Petroleum Corp. in Findlay, Ohio. “It’s low-key, not bulky or distracting.”

“Our biggest hurdle was communication,” Pusateri said. “Since Joel is in Chicago, we learned about his abilities and troubleshot our prototype through Skype and FaceTime. We shipped him our device to test it.” 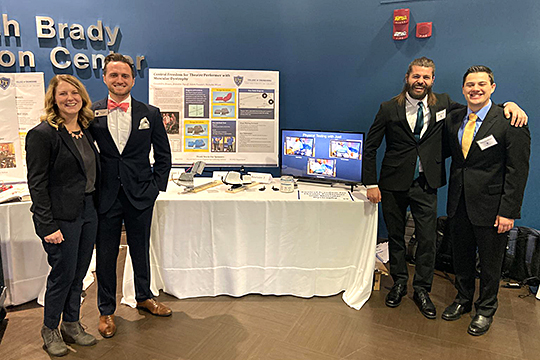 Muscular dystrophy is a genetic disease that causes progressive weakness and loss of muscle mass over time.

“Joel has no shoulder strength, so we came up with something designed to fit on his existing wheelchair that improves his range of motion,” said Wryst, who is graduating this month with a bachelor’s degree in mechanical engineering and starting his career at Cook Medical in Bloomington, Ind.

“You rest your elbow and forearm on the device, and then can swivel it left and right, extend it to reach for something, and bring it back.”

It would cost about $65 to duplicate the device. The main mechanism consists of four parts created with a 3D printer and a layer of thermoplastic to give grip and protection from the bolts. It’s mounted to a slider track, using two pulleys to support the bungee cables.

“Products like this are what allow people with disabilities to continue to lead independent lives,” Rodriguez said. “As someone who is involved in the performing arts and acting, being able to send not only your energy vocally but physically to the back of the house is important. And because I have limited range of mobility, a product like this ideally will help me be able to bring that expressiveness to the characters that I get to portray on stage.”

Dr. Matt Foss, assistant professor in the UToledo Department of Theatre and Film, connected the students with Rodriguez, who performed in Foss’ adaptation of “All Quiet on the Western Front” in Chicago.

“They worked with Joel in an ethical and empathetic manner with incredible results,” Foss said. “It truly speaks to the commitment to innovation that UToledo has in all areas — the arts and the sciences.”

The engineering team is presenting the prototype at the Kennedy Center American College Theater festival in January.

“There’s still more to be done to improve our device,” said Brown, who graduates this month and will start a full-time job at GE Appliances in Louisville, Ky. “It’s designed to replace an existing arm rest on a wheelchair. Mounting is something we’re still working on. Next semester, another group of engineering students will take over the project.”