Law school is no walk in the park for any student.

But Taneka Dick has had more thrown at her in her three years in law school than most students. She experienced some of the deepest valleys and highest peaks of her life, persevering through it all to graduate this month from Toledo Law.

“If I could use one word to describe Taneka, it would be resilience,” said Benjamin Barros, dean of Toledo Law. “She’s bright and engaging and has overcome a lot of challenges. She’ll be a fantastic lawyer.”

When Dick graduated from Olivet Nazarene University in Illinois with a bachelor’s degree in political science ― the first in her family to earn a college degree ― she was unsure of her future plans. A friend told her about opportunities with Teach for America, which recruits leaders to teach for two years in low-income communities.

Dick applied and was assigned to teach first grade in Memphis.

“It was extremely challenging,” she said. “I realized it’s not for me.”

When she was in elementary school and people asked her what she wanted to be, she replied teacher or prosecutor. Now that she had ruled out teaching, she started thinking about law school. She knew she wanted to return to her hometown and applied to Toledo Law. She was accepted and offered a scholarship.

Just before finals in her first semester in 2018, Dick lost her brother. It hit her hard.

“There was so much reading and pressure to stay on top of things,” Dick said. “I hadn’t been to school in a while, and it was challenging.”

She was taking a properties class with Barros at the time and sought him out for support. The pair bonded.

“He was super supportive and looked out for me,” Dick said.

When Barros learned of a job opening for Judge Tim Kuhlman in Toledo Municipal Court, he encouraged Dick to apply and gave her a reference. 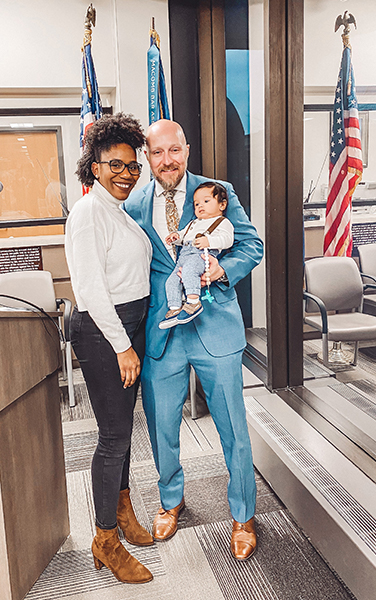 Dick was offered the full-time clerk position and switched to part-time night classes at Toledo Law.

“It was a cool opportunity to see the court system firsthand,” Dick said, “It was exhausting, physically and mentally, to work full time and go to school at night. But I really enjoyed my job and learned so much.”

Kuhlman said that Dick gives him hope for the future.

“As an elected judge, I appreciated her public service attitude and willingness to work with the people we serve,” he said. “She’s the classic example of the American dream. She didn’t have anything handed to her. Through her own dedication and hard work, she made it through law school.”

Dick has received more than a J.D. from UToledo.

After a get-to-know-you-event for incoming law students her first year, Dick was standing over her cranky car battery in the parking lot. A fellow law student, James Dick, stopped and asked if she needed help. A year later, the pair were married. Barros was a guest at their wedding.

After working at the Toledo Municipal Court for two years, Dick decided to quit her job so she could devote herself full time to finishing her law degree.

Shortly after making the decision, she found out she was pregnant. The couple had just moved to Michigan, and her pregnancy wasn’t easy. But thanks to COVID, Dick was able to complete a couple of semesters online and avoid the commute while she was sick.

At 38 weeks pregnant, Dick decided to push ahead and finish her two remaining classes this fall. Her professors encouraged her, and Dick said Kelly Tomlinson, assistant dean for student affairs, assured her they would work with her.

“She checked in and made sure I had what I needed and talked to my professors,” Dick said.

Dick missed more than a month of school. But once again, her support network at Toledo Law and at home stepped up.

When she was ready to go back to school, her husband drove her an hour and 20 minutes to class two nights a week. Her professors allowed her to scoot out of class to feed the baby. She’d nurse and then hand James off to her husband while she finished class.

“I’ve been through so much in my time at law school,” Dick said. “Everyone has been so accommodating and kind. It’s cool when you have professors and staff willing to help you get through.”

Dick said she also appreciated the culture at Toledo Law and that staff and faculty never pitted students against each other.

“They would always encourage us and remind us that there is more than this, that we had value and not to get wrapped up in the competition,” she said.

Dick’s not sure what’s ahead for her. She said she can see herself on either side, as a prosecutor or a defense attorney. For now, she plans to study for the bar, scheduled for February, and take care of baby James.

After all, juggling isn’t new to her. It’s what she does best.