January 13, 2016 | Events, UToday, — Communication and the Arts
By Angela Riddel

The paintings and sculptures featured in “Black Noise” focus on a series of moody and abstracted depictions and less obvious visions that begin with what remains of the industrial landscapes of Detroit’s River Rouge and the periphery of Toledo. 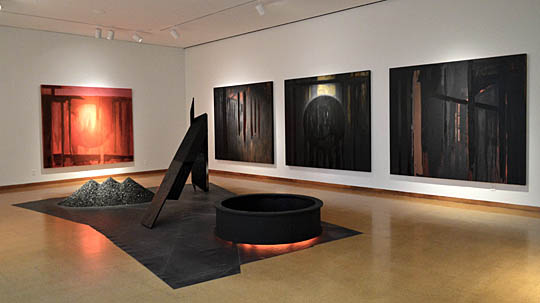 An exhibition titled “Black Noise” by Holly Branster will open Thursday, Jan. 14, with a reception at 6 p.m. in the Center for the Visual Arts Gallery on UT’s Toledo Museum of Art Campus.

Born in Gaylord, Mich., Branstner was raised in Detroit where she graduated from Wayne State University with a master of fine arts degree in 1983. She continued to reside and work as an artist in the Motor City for years.

Her work, often regardless of its subject, is always a reflection of her youth and subsequent summers spent at an idyllic Lake Louise in northern Michigan and her intimate, wrestling, and nostalgic relationship with the attracting complexities of Detroit, its surrounds, and Toledo, where she lives.

She has received numerous awards for her work, including three individual artist grants from the Michigan Council for the Arts and a Canaday Award from the Toledo Museum of Art.

Recently she has served as an artist-in-residence at the University of Dayton, where her work continues to be regularly shown in the context of exhibitions of American art from the Dicke Collection.

“Black Noise” will be on display through Sunday, Feb. 14. The free, public exhibition can be seen in the Center for the Visual Arts Gallery Monday through Saturday from 9 a.m. to 9 p.m. and Sunday from 10 a.m. to 9 p.m.

Branstner also will be at the gallery Thursday, Jan. 21, from 5 to 9 p.m. when the Center for the Visual Arts will be included as a stop on the bus route for the Arts Commission’s 3rd Thursday Loop.

See some of her work at hollybranstnerstudio.com.