The award, which will be given annually, is named after Shelley Papenfuse, who advocates for people living with disabilities through the Ability Center of Greater Toledo. 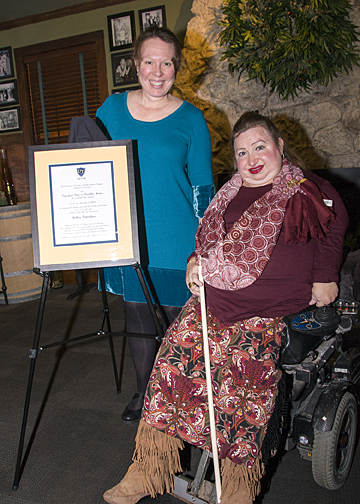 Dr. Kim Nielsen, left, announced a new award named in honor of Shelley Papenfuse. The first Papenfuse Prize in Disability Studies will be awarded in April.

“Shelley Papenfuse is a marvelous citizen of Toledo who has made a difference for thousands of people,” Dr. Kim Nielsen, professor and interim director of disability studies, said. “She has made it her life’s work to challenge barriers, fight against discrimination and inaccessibility, and help us understand the meaning and value of human difference. We hope our students are inspired by her passion and drive.”

“I am completely surprised and humbly honored,” Papenfuse said. “I’m excited for the students. By celebrating their work, it will encourage their vision for the future of our community.”

Papenfuse, who uses a wheelchair, was diagnosed as a child with juvenile rheumatoid arthritis that over time destroyed every musculoskeletal joint in her body.

“My world was very different,” Papenfuse said. “It was hard. There was so much I couldn’t do. I didn’t get to play with other children. I didn’t get to go to a regular school. So I’ve done as much as I can to help create an environment so children today with disabilities can be more like everyone else.”

The degree program kicked off at UT in the fall, and 14 students are majoring in disability studies, according to Nielsen. She said 15 students have chosen the program as their minor.

The Papenfuse Prize will be presented each year to a student in the Disability Studies Program for a critical paper or creative writing produced in an undergraduate disability studies class.

The award includes a monetary prize and will be given at the April honors and awards ceremony of the College of Languages, Literature and Social Sciences.

Students who want to compete for the award should submit the paper electronically to disabilitystudiesprogram@utoledo.edu by Friday, April 8.

Faculty, along with invited guests, will convene a special committee to select a winner.