Clinicians may soon have a better way to predict which of their diabetic patients are most likely to develop kidney disease, allowing for earlier interventions that keep patients off lifelong dialysis or transplant waiting lists.

In a study led by Dr. Rujun Gong, professor and director of kidney research at The University of Toledo College of Medicine and Life Sciences, researchers analyzed how an enzyme present in urine can be used as a novel biomarker for diabetic kidney disease progression. 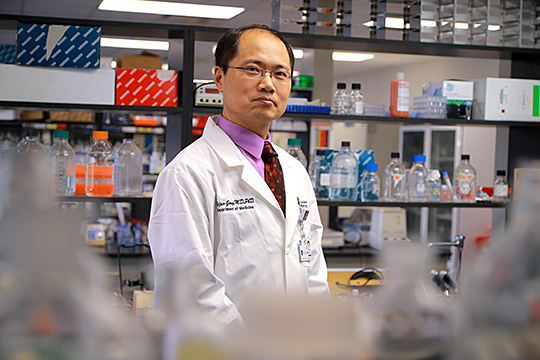 The study was published in the journal Kidney International.

“The research in this field is very important,” Gong said. “There is a pressing need to more precisely determine which diabetic patients are at the highest risk, as early intervention and intensive treatment can prevent this certain cohort of patients from developing diabetic kidney disease and kidney failure.”

Diabetic kidney disease is the No. 1 cause of kidney failure in the United States, accounting for nearly half of all new cases, according to the National Kidney Foundation. Prior research has shown approximately 40% of diabetics will develop kidney disease, but Gong said clinicians lack a reliable way of determining which patients will be affected.

“Right now, testing patients for albuminuria, or protein in the urine, is considered by some as a gold standard diagnostic,” Gong said. “However, in the field of nephrology practice, there is a huge debate about the test’s usefulness. There is evidence suggesting it is not accurate.”

By examining cell culture and animal models and performing a retrospective study of diabetic patients in China, Gong and his collaborators from the Brown University School of Medicine and Zhengzhou University concluded that an over-activation of an enzyme called GSK3-beta was strongly linked to the progression of diabetic kidney disease, and a better indicator of disease development than albuminuria.

GSK3-beta plays a key role primarily in the insulin pathway, helping the body transform glucose — or sugar — into glycogen — or stored energy — and back again. The enzyme is also pivotal for other cellular processes and can be measured in urine because it is present in cells shed from the kidney.

“The idea here is to take advantage of these exfoliated cells as a liquid biopsy,” Gong said. “It’s not painful. It’s not invasive. We can simply collect the urine and examine the exfoliated kidney cells as a biomarker.”

As the number of people with diabetes continues to grow, Gong said it is important to give clinicians new tools to keep their patients healthy. If a physician knows a diabetic patient is prone to developing kidney disease, they can take steps to reduce the risk by ensuring tighter glycemic control, strictly monitoring blood pressure, avoiding nephrotoxic drugs, and prescribing other protective medications.

Beyond being a biomarker, GSK3-beta may be a therapeutic target itself, as it is implicated in a number of kidney conditions. Previous research by Gong under the support of the National Institutes of Health grant found that very small doses of lithium, frequently used as a medication for conditions such as bipolar affective disorder, can inhibit GSK3-beta and accelerate the recovery of renal function.

The next step for researchers is to conduct a large-scale randomized study to further confirm the ability of GSK3-beta to predict diabetic kidney disease.