Enter if you dare: UT to present Sartre’s ‘No Exit’

The University of Toledo Department of Theatre and Film will present its production of Jean-Paul Sartre’s existentialist play, “No Exit,” this month. 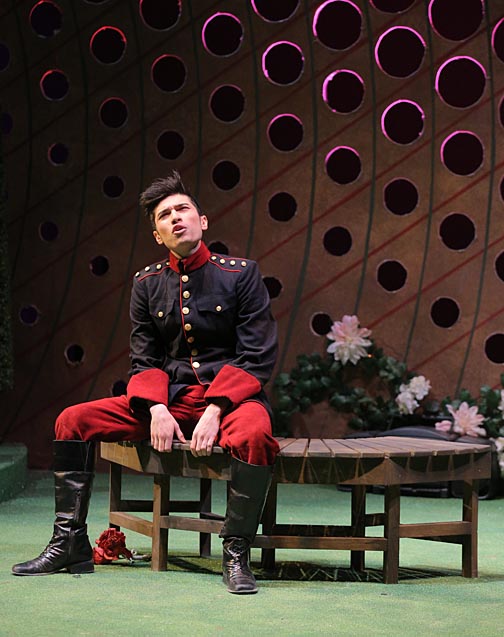 Andrés Medina, a theatre student shown here in a scene from the 2015 UT production of Shakespeare’s “Twelfth Night,” is directing “No Exit.”

Andrés Medina, a UT senior majoring in theatre, will direct the play.

“No Exit” takes place in hell, where three souls are mysteriously placed in the same room. There, they are trapped together for eternity and begin to realize the binding force keeping them in the room is one from within.

During the course of the play, the characters reflect on their past and share all of the unforgivable things they have done throughout their lives. The classic theme, “Hell is other people,” is presented as the story unfolds.

Medina said he is excited to explore the play’s theme of life after death and intrigued by Sartre’s philosophy.

“Everybody wonders about death and the meaning of life. I was also interested in Sartre’s philosophy that human beings supply meaning to the big questions of life and death out of their own experience of each,” he said.

The set will be minimalist, according to Medina. “Especially with this kind of play, I prefer to rely on movement, on the actors and their characters, to captivate the audience and hold their interest.”

While “No Exit” is Medina’s directorial debut, he assisted directing the UT productions of “Cabaret” and “The Adding Machine.” “The Adding Machine” was invited to be performed at the 2015 Kennedy Center American College Theatre Festival, Region 2. He also was the assistant stage manager for UT’s production of “Orpheus.”

Professionally, Medina served as the stage manager for the Glacity Theatre Collective’s production of “House of Vinyl.”

Tickets are $8 for students and children; $10 for seniors 60 and older, for military members, and for UT faculty, staff and alumni; and $15 for the general public. To purchase tickets or for more information on this event, visit utoledo.tix.com or call 419.530.ARTS (2787).