Eugene R. Fidell, senior research scholar in law and the Florence Rogatz Visiting Lecturer in Law at Yale Law School, will deliver the Order of the Coif Distinguished Lecture Tuesday, Feb. 23, at noon in the Law Center McQuade Law Auditorium.

The free, public lecture is titled “Military Justice and Its Reform” and accompanies a visit by the U.S. Court of Appeals for Veterans Claims, which will hold a public session at the College of Law Wednesday, Feb. 24. 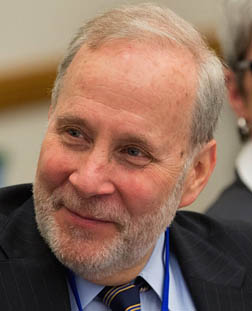 In his talk, Fidell, who is representing Sgt. Bowe Bergdahl in his pending court martial, will examine current proposals for modernization of the U.S. military justice system not only in light of the overall trajectory of U.S. military justice, but also against the backdrop of contemporary human rights standards and developments in other countries.

“We’re thrilled to host a speaker who is currently handling what is beyond doubt the most high-profile pending court martial in the United States Armed Forces,” said Geoffrey Rapp, associate dean for academic affairs at the UT College of Law and president of the college’s chapter of the Order of the Coif. “Many of our graduates have successfully obtained commissions as [judge advocate general] attorneys, and for students interested in that career path, this is a rare opportunity to discuss military justice in a law school setting.”

Fidell is a co-founder and former president of the National Institute of Military Justice and of counsel at Feldesman Tucker Leifer Fidell LLP, in Washington, D.C. He is a life member of the American Law Institute and a member of the Defense Legal Policy Board of the Department of Defense and the board of directors of the International Society for Military Law and the Law of War.

The Order of the Coif is an honorary scholastic society that encourages excellence in legal education by fostering a spirit of careful study, recognizing law students who attained a high grade of scholarship, and honoring lawyers, judges and teachers who attained high distinction for their scholarly or professional accomplishments.