The University of Toledo was represented well at the 2016 Liberator Awards last month. Katie Bush, UT clinical simulation and educational research associate, received a Liberator Award in the individual category, and Nora Riggs was recognized as an award winner in the student category.

The Liberator Awards were created in 2013 by author, advocate and survivor Theresa Flores in recognition of William Lloyd Garrison, an American abolitionist, journalist, suffragist and social reformer. These awards were created both to unite local people fighting human trafficking and to recognize the work of outstanding individuals and groups making headway in the fight. 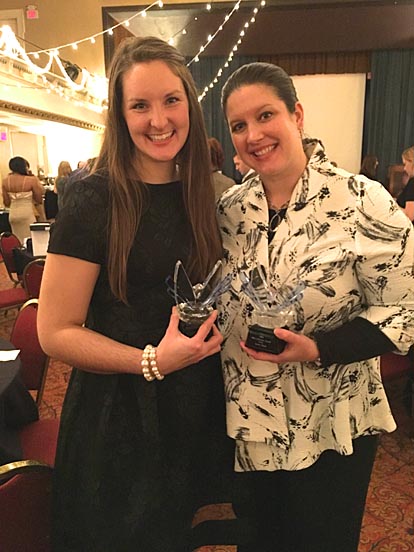 Two years ago, UT Medical Center joined the Lucas County Human Trafficking Coalition, and since that time, the hospital has developed trainings that the Emergency Department staff — including nurses, EMTs, clerks and residents — are required to complete. These trainings are designed to teach emergency staff to recognize red flags that help identify trafficking victims, a critically important part of the their jobs because research shows that some of the only outside contact trafficking victims may have, other than with their traffickers and buyers, is with emergency personnel.

In July, Bush received a 30-minute slot in new clinical employee orientation to provide this training to all new nurses, clerks, aides and any other clinical employees throughout the hospital. Educational brochures on the subject also are available in the lobby.

“Eventually, we hope the entire hospital is aware of the resources available when we’re able to identify these victims,” Bush said.

In addition to developing these trainings, Bush was the primary author of the national Emergency Nurses Association position statement on Human Trafficking Patient Awareness in the Emergency Setting. This statement was created to educate emergency nurses throughout the country on their essential role in identifying trafficking victims. According to Bush, half the battle is simply getting the information out.

Human trafficking is an issue growing faster than drug trade, Bush said, and that’s why she intends to continue working and educating others about it. “You can use drugs once, but you can use a person over and over,” she said.

“I could not have accomplished many of the things UTMC is doing without support from [Nursing Director] Deanna Montanaro, [Staff Development Coordinator] Greg Shannon, and [Lead Nurse] Julia Benfield,” Bush said. “And it is a must that I thank the Lucas County Human Trafficking Coalition for all of the great work they are doing. Our community is very lucky to have the coalition.”

Riggs began her journey in the fight against human trafficking in 2011 during her sophomore year at Albion College, when she attended conferences and presentations and co-facilitated awareness events on campus. She spent summer 2013 conducting a research project on aftercare for survivors of trafficking and then in fall 2014, she came to The University of Toledo for the master’s in social work program and later joined the Lucas County Human Trafficking Coalition.

“[This award] reminds me that every single one of us plays a role in this fight, that we can all make a difference, and that it is not an individualistic task, but rather a community-wide effort,” Riggs said.

She said she wants to be in a constant state of learning and growing, keep the momentum going, and work to find the best ways to help trafficking survivors become thrivers.

To that end, Riggs continues to work with the UT Human Trafficking and Social Justice Institute. In November 2014, the UT Board of Trustees approved the institute, which opened in April 2015. Since then, the institute has been working on around 25 projects to fight human trafficking locally, statewide and nationally. In addition to providing trafficking victims with much-needed resources, these projects work to establish protocols and procedures for Lucas County health-care professionals to recognize and respond to human trafficking.