Toledo will open the 2022 MAC Tournament vs. No. 8 seed Central Michigan on Thursday, March 10, at 11 a.m. in Cleveland’s Rocket Mortgage FieldHouse. 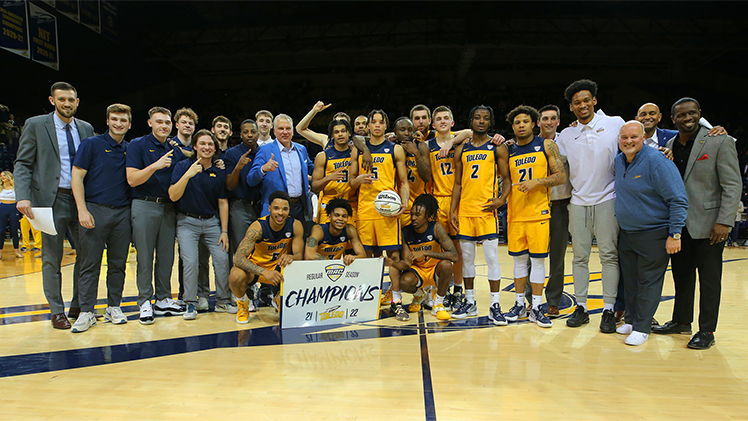 Toledo will open the 2022 MAC Tournament vs. No. 8 seed Central Michigan on Thursday at 11 a.m. in Cleveland’s Rocket Mortgage FieldHouse.

And on Saturday, the first-place Toledo women’s basketball team ended its regular season at home with a 74-61 win over Western Michigan.

Toledo will face No. 8 Ohio in the first round of the MAC Tournament on Wednesday, March 9, at 11 a.m.

For the men’s team, the 25 wins are tied for second in program history with the 2018-19 squad. In addition, Toledo’s 40-point victory was its largest ever over the Falcons.

“Winning back-to-back titles is a great accomplishment and I’m proud of our guys and staff,” Head Coach Tod Kowalczyk said. “It was a great way to end our home season. Our fan base is awesome, and I think they really appreciated this team and how they played for each other.”

All five starters scored in double-figures for the Rockets and combined to shoot an amazing 68.8 percent (33-of-48).

Toledo shot 57.8% from the field and was a scorching 12-of-24 from three-point range. The Rockets dished out a season-high 25 assists and committed only eight turnovers.

The Falcons could only muster a 35.4 shooting mark en route to a season-low point total. Senior Daeqwon Plowden paced the Falcons with 19 points.

Toledo took control midway through the first half and held a 47-28 halftime lead. Bowling Green never threatened in the second half as the Rockets led by as many as 44 points. 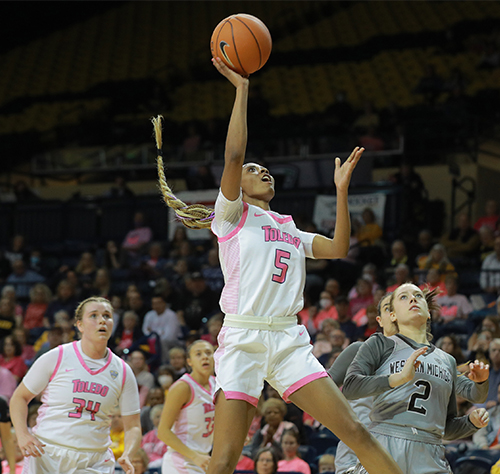 Junior Quinesha Lockett scored 15 points in the Rockets’ 74-61 win over Western Michigan. Toledo will face No. 8 Ohio in the first round of the MAC Tournament on Wednesday at 11 a.m.

For the women’s team, the Rockets have now reached the 25-win plateau for the 12th time in program history and the first time since the 2016-17 season.

“We knew today would be a fight,” head coach Tricia Cullop said. “I was really proud of how well we shared the ball today. It was great to see so many players score in double figures, or be close to double figures. I thought we did a great job on the boards as well.

“We could have done a better job taking care of the basketball, but you have to give credit to Western Michigan’s defense as well. I thought it was a good game to help us fine-tune some things before we head to Cleveland.”

Prior to the game, Toledo honored two student-athletes and one manager during its Senior Day presentation. Seniors Mariah Copeland and Lexi Lance as well as student manager Jakob Stober were honored before the game for their contributions to Toledo Women’s Basketball.

Fans interested in purchasing tickets to the MAC Tournament can visit utrockets.com/MACTournament for more information.