Former Toledo Softball coach Cheryl Sprangel was named to the 2022 class of the Mid-American Conference Hall of Fame, the MAC office recently announced. Sprangel will join 11 other inductees at the induction ceremony in Cleveland later this spring.

In recognition of the 50-year anniversary of the passing of Title IX, this year’s class features individuals from each member institution who have contributed to the advancement of women’s athletics. 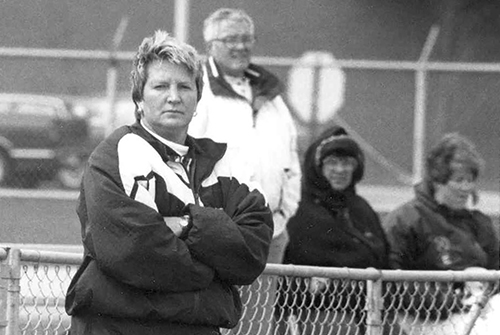 In 1985, Cheryl Sprangel became the first Rocket head coach of a women’s sport to win a Mid-American Conference Championship.

Sprangel was a trailblazer for women’s athletics at The University of Toledo, becoming the first Rocket head coach of a women’s sport to win a Mid-American Conference Championship. Sprangel coached the UToledo softball team for 14 years from 1984-97, racking up 461 career victories and 12 winning seasons.

The Rocket softball program was in just its fourth year of existence and coming off a 3-24 season when Sprangel took over the program. The transformation was immediate, as the Rockets went 27-19-1 in her debut season in 1984. Her teams went on to win MAC titles in 1985, 1989 and 1992, and came in second place six times.

Sprangel coached two All-Americans at Toledo, Rhonda King-Randolph and Leigh Ross, and mentored four Academic All-Americans, as well. She left UToledo prior to the 1998 season to accept the head coaching position at Virginia, where she posted a 303-215 mark in eight seasons with the Cavaliers. When she retired from coaching in 2005, Sprangel ranked 22nd all-time among Division softball coaches with 763 victories.

Sprangel also was a trailblazer as a student-athlete, as she was one of the first two women in the state of Michigan to be awarded an athletic scholarship. She earned a basketball scholarship at Jackson (Mich.) Community College in 1975. She also played volleyball and softball at Jackson C.C. She later transferred to Michigan State where she earned three letters as a pitcher from 1977-79.