History repeats itself is an oft-repeated axiom-turned cliché for a good reason. It’s true.

But many of our ongoing cultural anxieties also have historical roots, said Dr. Linda Rouillard, professor of French and chair of The University of Toledo Department of World Languages and Cultures. 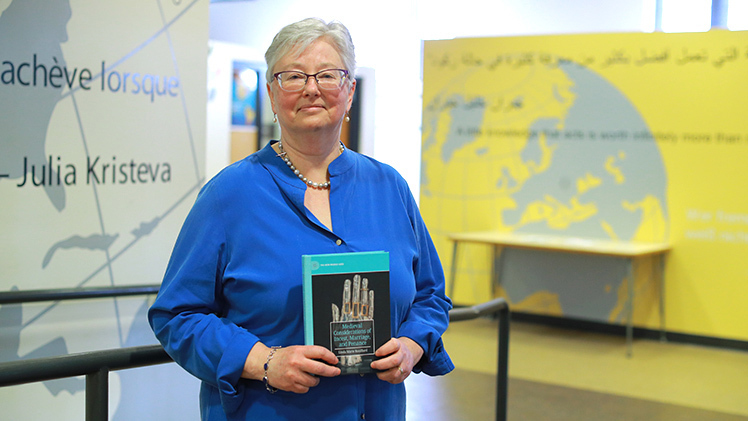 “Medieval Considerations of Incest, Marriage, and Penance” was a long-standing project for Dr. Linda Rouillard, professor of French and chair of The University of Toledo Department of World Languages and Cultures.

In the Middle Ages, for example, the fear of inadvertently committing incest was prevalent – in part because of complicated definitions of what constituted an incestuous relationship.

“This anxiety over inadvertent incest sometimes arises in our times relative to assistive reproductive technology when a prolific sperm donor fathers numerous children who then live in the same community and could potentially meet and marry,” Rouillard said.

“Obviously, this is not the case for most IVF cases, but incest stories sell papers. Likewise, in the Middle Ages, incest could be the ‘slippery slope’ connection that called attention to one’s position on changes in the definition of marriage.”

Rouillard delves into this topic with her newly published book, “Medieval Considerations of Incest, Marriage, and Penance,” which studies social change and the anxieties over these changes as reflected in medieval narrative poetry.

“What happens when we change rules about marriage, for instance?” she said. “These changes have significant material repercussions on the definition of family, distribution of wealth, and creation of power. Similarly, today our society’s changing definitions of who gets to marry whom have provoked similar social anxiety and conflict.”

The book was a long-standing project, Rouillard said, and her goal with its publication was to use literary examples to demonstrate similarities between the social anxieties of the Middle Ages and our own time.

The social mores that are applied to marriage are one illustrative example. In the Middle Ages, rulings from the Roman Catholic Church stressed the need for individual consent and upended long-held traditions of parents having the ultimate authority in matrimonial matters.

“Our 21st century society has grappled with the changing definitions of marriage and the legitimization of same-sex marriage in the face of continuing opposition from fundamentalist Christians and right-wing politics,” she said. “One’s definition of marriage has become a political litmus test.”

And just as Rouillard was inspired to write the book based on historical writing, she said she hopes the book’s readers will feel similarly inspired to seek out and read more medieval narratives.

“The psychological insights of an author such as Chrétien de Troyes [a French poet known best for his Arthurian romances] remind us that the Middle Ages were not naive or ignorant,” Rouillard said. “They offer us profound, complex reflections on human behavior.”

Rouillard’s book, published by Palgrave Macmillan, is available as a hardback and ebook.