When it comes to the body’s immune response to a pathogen, there can be too much of a good thing.

Too little of a response and a virus can replicate out of control. Too much of an immune response can lead to dangerous inflammation that may cause more damage than the virus itself. 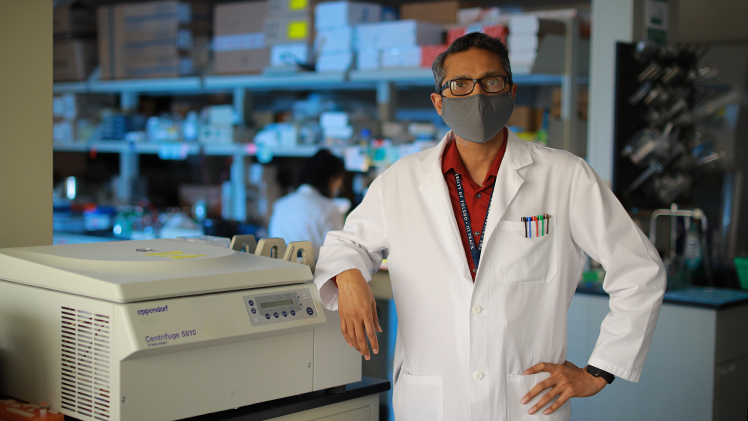 “In the case of a bacterial or viral infection, it was always thought that the pathogen load determines the outcome,” said Dr. Saurabh Chattopadhyay, an assistant professor of medical microbiology and immunology at The University of Toledo College of Medicine and Life Sciences. “But the virus-induced inflammatory response also plays a very critical role in determining whether the virus is going to win or the host is going to win. Although inflammatory responses contribute to blocking viral infection, too much inflammatory protein is bad for the host.”

With the support of a $2.2 million, five-year grant from the National Institutes of Health, Chattopadhyay is studying how IRF3, a protein that plays a key role in activating the body’s antiviral immune system, might also regulate virus-induced inflammatory responses.

Chattopadhyay is focused on identifying the specific details of how IRF3 regulates viral-induced inflammation. By better understanding the process, it might be possible to target that pathway with therapeutics that could reduce inflammation and lessen the severity of viral diseases. Furthermore, this pathway may be targeted therapeutically against non-viral inflammatory diseases, such as liver inflammation.

An overheated immune response leading to uncontrolled inflammation and the body attacking itself is implicated in several viral infections, including influenza. More recently, those cytokine storms have been identified as a key driver of serious COVID-19 complications.

Chattopadhyay has spent much of his career studying IRF3, or interferon regulatory factor 3. Present in most of the human body’s cells, IRF3 lays dormant until activated by infection, which rapidly induces a number of other antiviral proteins to go to work.

Several years ago, Chattopadhyay led a team that conducted breakthrough research that revealed IRF3 also played a key role in preventing a virus from replicating in the body by inducing a pathway to selectively kill individual cells that are infected with a virus.

“This is a multifaced molecule that can do many different things,” he said. “We’ve already used a drug screen of FDA-approved therapeutics to look at leveraging the cell-death pathway to fight viral infections. We think in the future, we can use a similar approach to target the new function of IRF3 in order to regulate the inflammatory response.”