As the world watched a novel coronavirus begin to spread beyond central China, a team of molecular experts at The University of Toledo Medical Center were already weighing how they might be able to test for the dangerous new disease here in northwest Ohio.

Just a handful of cases had been confirmed in the United States at that time, and testing was barely off the ground in the country. Only the Centers for Disease Control and Prevention was providing laboratory services. 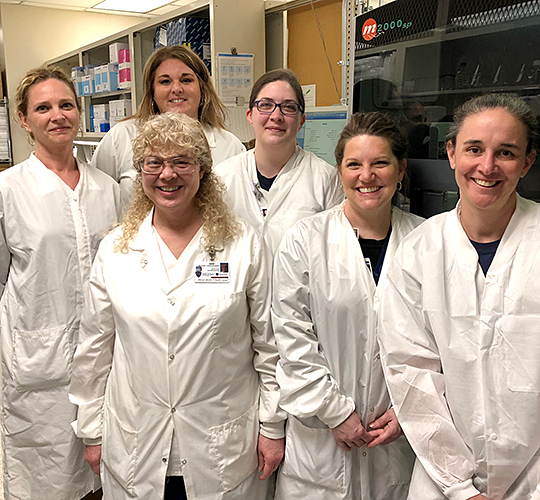 Working in the lab are, back row from left, Heather Byrd, Nicole Ortiz and Heather Kvale, and front row from left, Michelle Lewandowski, Holly Mohon and Shauna Rasor.

Even so, Dr. Ji-Youn Yeo, a UTMC molecular specialist who earned her Ph.D. in biomedical sciences from UToledo, was eager to put a plan together.

Her early push paved the way for UTMC’s pathology laboratory to become the first location in northwest Ohio capable of testing samples for COVID-19.

“Dr. Yeo said, ‘I want to do this,’ and put it in motion. When she came to us, it was really early, but we knew we could do it,” said Cynthia O’Connell, the lab’s administrative director.

A few weeks later on March 18 when Abbott Molecular received an emergency use authorization from the U.S. Food and Drug Administration for a new test using one of its molecular instruments, UTMC jumped at the opportunity.

By March 23, UTMC’s lab was up and running. The lab has the ability to test up to 180 samples per day and return results in less than 48 hours.

“We had the right equipment here, and we had folks who had the knowledge,” O’Connell said, noting that a number of individuals inside the lab, elsewhere in the hospital, and in the College of Medicine and Life Sciences deserved credit for the project coming together in such a short amount of time.

Microbiology supervisor Heather Byrd worked to source the difficult-to-find swabs necessary for doing the testing. Molecular specialist Heather Kvale and microbiologist Nicole Ortiz worked to get confirmed positive and negative samples from Columbus and Detroit to validate the UTMC test.

There also was help from Dr. Travis Taylor, assistant professor in the Department of Medical Microbiology and Immunology in the College of Medicine and Life Sciences, who created the viral transport media needed to keep testing swabs safe until they’re examined in the lab — another material in very short supply across the country.

One of the biggest contributions to the speed with which UTMC was able to start testing came from Yeo, who also worked as a postdoctoral fellow under Dr. Bina Joe, Distinguished University Professor and chair of the Department of Physiology and Pharmacology in the College of Medicine and Life Sciences. Yeo still regularly collaborates to research in the Joe lab focusing on microbiome sequencing.

On the COVID-19 project, Yeo modified the test to make it safely work at UTMC and then ensured the accuracy following those modifications.

“Dr. Yeo made validation of this testing seemingly effortless, minimizing the number of runs it took to bring this online and saving days’ worth of testing. Her organization helped us go live as fast as possible,” Kvale said.

For O’Connell, the biggest payoff is seeing how UTMC is able to help the region.

“It’s wonderful to be able to do something for the community. We’ve had so many other hospitals say thank you. Many times, they were waiting seven or eight days to get results back. We can provide results in less than 48 hours,” O’Connell said. “It’s nice to be able to help.”