Jacob Connolly always had an interest in the brain. Now, that interest is paying off.

Selected from a field of more than 5,000 applicants, Connolly joins an exclusive cohort of high-achieving students, each a future leader in their respective fields. 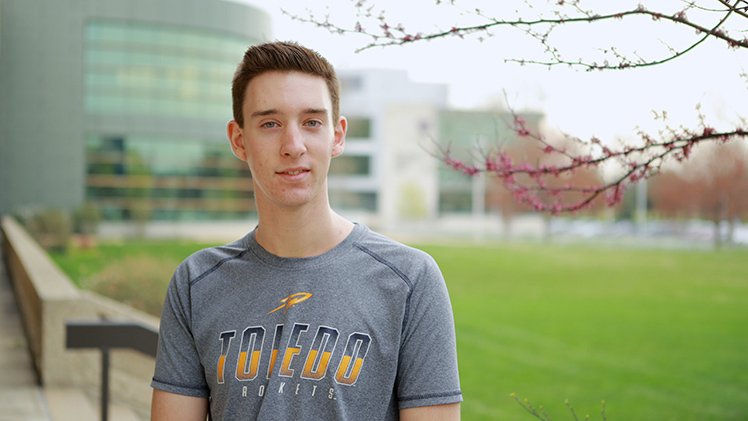 A junior in the College of Engineering, Jacob Connolly was selected from a field of more than 5,000 applicants to receive a Goldwater Scholarship, one of the country’s oldest and most competitive honors in the fields of science and mathematics.

“It feels amazing to see that all the work that I’ve put into this research is being recognized,” said Connolly, who also is a student in the Jesup Scott Honors College. “I think my research is really interesting, and it’s nice to share it with others who believe it could have an impact on the health of the general public.”

Connolly’s research focuses on neurodegeneration in a strain of rodents known to develop chronic kidney disease, a key indicator of future cognitive impairment. Connolly studies the effects of various factors on the speed of that degeneration.

“I test the cognitive ability of these animals. We look at different factors such as age and a diet high in salt to better understand if those factors have an effect on their cognitive processes.”

In addition, Connolly studies the paraoxonase enzymes, which may be linked to protection against cognitive impairment and dementia. All of his research takes place in the labs of Dr. David Kennedy and Dr. Steven Haller, assistant professors in the UToledo College of Medicine and Life Sciences, with whom he became connected via the integrated co-op program in UToledo’s bioengineering program.

“When I was looking for my first co-op rotation, I knew pursuing undergraduate research was something that interested me,” he said. “So, I found a list of possible advisors, I sent them emails and Dr. Kennedy responded and said, ‘I’d be happy for you to come work in our lab.’”

Kennedy said he is glad to have Connolly on the team.

“We emphasize a team-based approach to science in that we expect all members of the lab to work together to achieve common goals. Since day one Jacob has embraced this philosophy,” Kennedy said. “He is an exceptional team player and has elevated the science of everyone with whom he interacts. Multiple trainees and staff in our lab have spontaneously commented on what a pleasure it is to work with Jacob – they absolutely love him.”

Beyond Connolly’s immediate impact on the UToledo research community, his faculty mentors said they believe his work will have a long-term impact on the field.

“Patients who suffer from neurodegenerative disorders currently have limited treatment options. Jacob has discovered an antioxidant enzyme the body already produces that may have significant protective functions in decreasing inflammation in the brain,” Haller said. “By understanding how this enzyme functions and what factors regulate it, we are aiming to create therapies that augment the body’s own natural defense system to help it prevent, heal or recover from various forms of damage or trauma.”

Connolly said he intends to continue his research through the end of his time at UToledo, but he has big plans for his postgraduate studies.

“My plan right now is to go to medical and graduate school to receive an M.D./Ph.D. I would like to focus on neuroscience, as my long-term goal is to become a neurosurgeon,” he said. “I do not know exactly where I will continue my education, but I’ve lived in the Toledo area my entire life and The University of Toledo has always been a crucial part of it, so that’s definitely one of my top choices.”

The newly minted Goldwater scholar is nothing but thankful for the support he’s received as a Rocket.

“There are always people at The University of Toledo who are willing to help you,” he said. “Without Dr. Kennedy and Dr. Haller, none of this would be possible.”