The 2016 Dean’s Club Symposium of The University of Toledo College of Medicine and Life Sciences celebrated the volunteer service of a local business owner and awarded the first Kenneth A. Kropp, MD, Endowed Professorship of Urology.

The event held Tuesday at the Radisson Hotel on UT’s Health Science Campus also was an opportunity to thank the more than 300 members of the Dean’s Club who have each committed at least $10,000 to help the college and UTMC meet its mission of excellence in medical education, research and clinical care. Gifts from members provide essential funds for scholarships, faculty research support and other innovative programs. 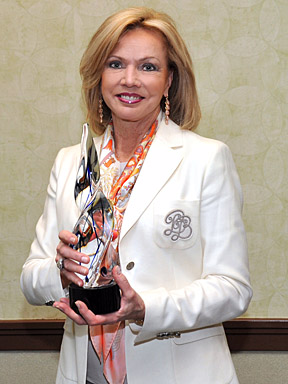 “Philanthropy is essential to our mission, and philanthropy is making a difference,” said Dr. Christopher Cooper, executive vice president for clinical affairs and dean of the College of Medicine and Life Sciences. “In the last fiscal year, the college raised over $6.5 million in new gifts and pledges. We are tracking very well to meet and exceed that total for fiscal year 2016. Each of you in this room is part of that success story.”

The 2016 Ashel Bryan Distinguished Service Award was presented to longtime UT supporter Marianne Ballas, who owns Ballas Buick GMC on Central Avenue. Ballas is the chair of Women & Philanthropy at UT, an organization created under her leadership in 2006. She also is one of the founding members of the College of Medicine Advisory Council.

“Marianne is a dreamer and an innovator,” said David Bryan, Ashel Bryan’s son. “Now with an endowment of over $1 million, the Medical Research Society can distribute grants of $50,000 a year to deserving faculty members who have the potential for bringing not only millions of dollars to the University and the community, but just as importantly, improving the health of everyone in this region.”

“I can feel the momentum,” Ballas said. “I am so excited about the future of research at The University of Toledo. I believe what we’re doing here is going to define the University eventually as a major research center.” 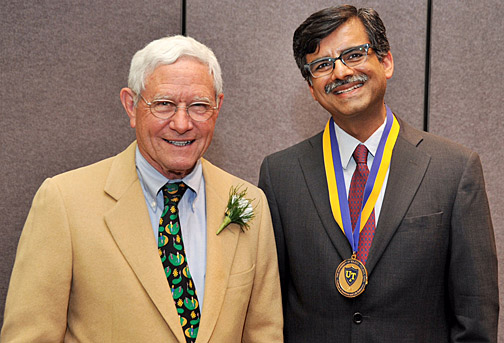 The first Kenneth A. Kropp, MD, Endowed Professorship of Urology was awarded to Dr. Puneet Sindhwani, the newly named chair of the Department of Urology in UT’s College of Medicine and Life Sciences.

Kropp, who built the largest kidney transplant program in the region, presented a medallion to his former student.

“I am delighted to know he will be the first holder of the chair,” Kropp said.

“I will do my best to continue my mentor’s tradition of excellence,” said Sindhwani, who completed his urology residency and obtained a master of science degree in biomedical sciences in 2001 from the Medical College of Ohio. “This is a great day. It’s a wheel turned full circle. Dr. Kropp was the first attending who got me interested in urology 22 years ago.”

Sindhwani served as an associate professor of urology at the University of Oklahoma Sciences Center since October 2005. He was the university’s chief of male infertility and andrology section, and he started the male reproductive health program.

Previously, Sindhwani was the surgical director of pediatric and adult renal transplantation at the Children’s Hospital and Oklahoma Transplant Center. He also headed the urology section at the VA Medical Center in Oklahoma City.