A Journey From Hollywood Studios to a Nursing Degree

Lindsey Bixler’s life doesn’t look like what she thought it would at age 35, but she knows the paths she followed were a necessary part of her journey.

Bixler will graduate from The University of Toledo in May with a master of science degree in nursing, a notable shift from the last decade she spent working at major Hollywood film studios.

“There were 10 years of exploring life before I came back to this field, and I realize it was always meant to happen that way,” she said. “There is peace that accompanies the realization that some things don’t happen for a reason and we should be grateful for that because something that is truly aligned with us is usually waiting for us. I wasn’t mentally ready to nurture a patient when I hadn’t yet nurtured myself.”

Bixler started college as a pre-med major with a dream to become a plastic surgeon. She changed plans halfway through and graduated from Michigan State University with a double major in theater and film. After graduation, she landed a job in Hollywood doing post-production work on Disney and Pixar films like “Cars” and “Tangled,” and later worked for Warner Bros.

While in California, the theme of medicine and caring for others, something Bixler is deeply passionate about, kept weaving its way into her life. She got involved in an integrative and alternative medicine community, volunteered at women’s shelters, visited homebound older adults and mentored teenage girls who were victims of physical and sexual abuse.

“All this medicine started coming back into my life without even asking,” she said. “The more I was around it, the more I realized I couldn’t deny my love for medicine and helping people.” 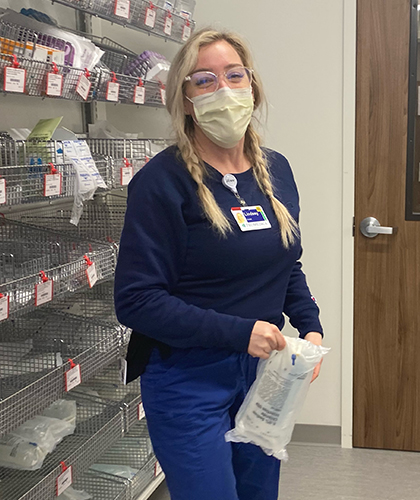 Bixler moved home to Erie, Mich., in late 2018 and began the master’s program at UToledo the following year. She jumped right in and joined several graduate-level committees and also became an ambassador for the College of Nursing, giving tours, speaking with alumni and sharing her experiences with prospective students.

“Right out of the gate, she was like a firecracker,” said Dr. Holly Myers, instructor in the UToledo College of Nursing. “She is very much engaged in everything she does and wants to soak in everything she’s learning.”

Self-described as a nurturer and empath, Bixler wants to work with seniors, veterans and individuals with disabilities.

“I am all about patient interaction. I want to touch people and hug them. I need people in my arms,” Bixler said. “I want to paint a picture of hope and focus on my patients’ abilities so they can continue to live a life full of joy, health and fulfillment instead of some grim prognosis society has painted of our later years.”

Myers is confident Bixler will do just that.

“She’s not just doing a job,” Myers said. “She’s always looking for ways to improve the patient care experience. Her patients are going to be very lucky to have her.”

Bixler will begin her doctor of nursing practice (DNP) degree in gerontology at the University of Michigan in the fall. She plans to attend school and work part-time in the emergency room at a local hospital.