Graduating with a Bachelor of Science in Mechanical Engineering Technology on May 8, Anne Steffan has a job lined up with Matrix Technologies, Inc., a Maumee-based engineering, automation and information system provider with offices nationwide.

And while there are many aspects of Steffan’s years in the College of Engineering that she enjoyed, it’s the time that she spent giving back to the Toledo community of which she is most proud.

Steffan was involved with the American Red Cross and Alpha Kappa Psi, and her experiences with the Bridge Club and Food Recovery Network led her to be a servant leader.

The Bridge Club makes and delivers hundreds of sandwiches each week for the hungry and homeless, and the students involved in the Food Recovery Network take food leftover in the dining halls at the end of each week to various community shelters and food pantries.

“The diverse range of community service opportunities and organizations through UToledo that I have had the chance to be a part of has allowed me to grow into a more well-rounded person,” Steffan said. “The values I have learned, such as service, community and leadership, are experiences and lessons that I will take with me and cherish as I move into the next chapter of my life.” 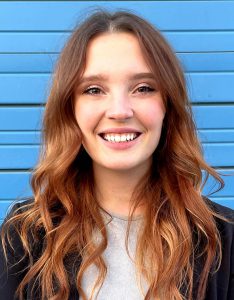 Through her classes and her senior capstone project, Steffan said professor Eric Towell was the person who has influenced her the most during her time as a Rocket.

“Professor Towell has challenged me to be a better engineer and take more leadership roles,” she said, “and he has shown me what it means to be a servant leader.”

Towell said Steffan’s ability for thoughtful self-reflection has been critical in her growth, both as a student and as a person.

“What makes Anne’s experience unique is that she has both the self-awareness and presence of mind to request the feedback necessary to further develop herself,” he said. “That takes courage … and it’s been a gift to know that I had a hand in fostering such an environment in her.”