Women’s basketball player Mariella Santucci made the most of her time at The University of Toledo.

“I worked extremely hard to be the best on the court and with my studies,” Santucci said. “It was very important for me to do well at both.”

Santucci will graduate May 9 with a bachelor’s degree in international business and an impressive 3.39 GPA. She is also the only player in program history with at least 1,000 points, 600 helpers, 500 caroms and 200 thefts.

“I’m proud of what I accomplished at Toledo,” said Santucci, who will be the first person in her family to earn a college degree.

She is excited to earn her degree, but sad to not have the opportunity to walk across the stage because the University canceled the event due to the COVID-19 global pandemic.

“I feel bad for all graduates to not get the chance to walk,” Santucci said. “We need to look at the bigger picture, though, and it’s much more important to keep everyone safe.” 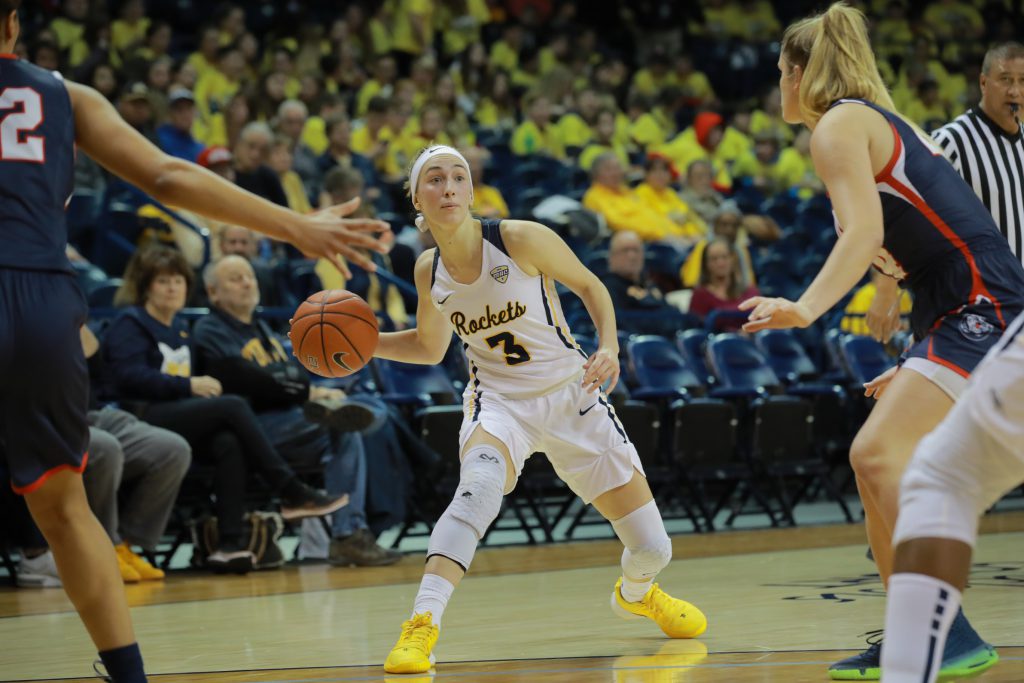 “I’m the person that I am now because of all my experiences with the Rockets,” said Mariella Santucci, who earned Academic All-Mid-American Conference honors a school-record three times as a member of the women’s basketball team. She will receive a bachelor’s degree in international business.

Graduation was the last thing on Santucci’s mind when she arrived at Toledo as a freshman in fall 2016. Speaking little English, she was hesitant to leave her home country. A native of Bologna, Italy, the capital and largest city of the Emilia-Romagna region in Northern Italy, Santucci had concerns about attending college in the United States.

“I didn’t know how I was going to adjust,” she said. “I wasn’t sure how basketball and school would go hand in hand. Back home, it was one or the other, but never at the same time. I just didn’t know what to expect.”

Santucci settled in quite nicely as a freshman and played a big role in the Rockets capturing the 2016 MAC Championship, its first title since 2001.

“One of my greatest memories at Toledo was winning the MAC Championship,” said Santucci, who was named to the 2016 MAC All-Tournament Team.

Over the next two years, Santucci helped the Rockets advance to the second round of the Postseason WNIT on both occasions.

Then this past season as a team captain, Santucci led the MAC in helpers (160) and finished second in assist/turnover ratio (1.70, 160-94). As a result of her efforts, she was named team MVP and was selected the Ultimate Rocket, which is awarded to the player who excels on the court, in the classroom, and in the community.

“It was a great honor to receive those two awards,” Santucci said.

Santucci is heading back to Italy in the coming weeks and will have to quarantine herself for 14 days before starting the next chapter of her life.

“We have many cases of the virus close to my home,” said Santucci, whose family is currently safe and healthy. “Every city around Bologna is in lockdown. The only places you can go are the grocery store or the pharmacy.”

Once she is home and the virus is under control, Santucci will begin the process of determining what’s next for her.

“I’m looking to play professionally overseas and get a master’s degree during the offseason,” Santucci said. “My initial thought is to get an MBA and specialize in trying to stabilize the economy.”

Santucci knows that whatever path she chooses, her time at Toledo provided her the proper foundation for future success.

“My time at Toledo was great and prepared me for my future,” Santucci said. “I’m the person that I am now because of all my experiences with the Rockets.”