For 16 years, the Spitzer Space Telescope was NASA’s premier infrared observatory before being decommissioned in 2020 — leaving behind a mountain of data from its lifetime revolutionizing our view of the cosmos.

Teddy Walsh was a sophomore at The University of Toledo when a faculty member in the Department of Physics and Astronomy recruited him to work on a large project using Spitzer’s spectroscopy archives called SIMLA, the Spitzer IRS Mapping Legacy Archive.

“I was surprised I was able to begin working on research so early in my college career,” Walsh said.

When the double major graduates May 7 with bachelor’s degrees in physics and mathematics, Walsh leaves behind his own legacy not only at UToledo, but in the field of astronomy.

Over the course of three years, he used his combination of big data and computational skills and knowledge of astrophysics to lead a group that built a new database encompassing the entire Spitzer spectroscopy archive.

“It feels great to make such an impact and be part of something that is going to accelerate so many discoveries,” Walsh said. “This database will speed up a lot of research projects tremendously for astronomers all over the world because it can give you everything you need to know based on the area of the galaxy you’re interested in.”

“His contributions have been truly essential,” said. Dr. J.D. Smith, director of the UToledo Ritter Astrophysical Research Center and professor of astronomy. “Building on this powerful foundation, we are wrangling literally millions of data frames into a comprehensive view of the infrared spectral universe.”

Walsh started taking math, physics and computer programming courses at UToledo when he was a senior at Sylvania Southview High School as part of Ohio’s College Credit Plus program, which allows students to earn high school credit and college credit at the same time for free.

“In the mornings, I’d be at Southview and take my high school classes, and in the afternoons, I’d drive to UT and take those courses,” Walsh said. “After graduating high school, I came into college with around 60 credits and was considered a junior.”

Since College Credit Plus helped him get ahead on math, he chose to add another major to finish within four years.

“I’ve always been a nerd about space,” Walsh said. “I really love the computer science aspect of astrophysics, so what I might be hoping to do with my career is the data science and computer simulations of black holes and galaxies and stuff like that.”

During his freshman year, Walsh took a couple 200-level astronomy courses taught by Smith, who ended up asking him and three other students to participate in a research project.

“He said, ‘You did well in my class. I think I’ve got a big project for you guys that you can do for research,’ ” Walsh said. “And that’s where it started.”

Along with students McKenna Dowd, Julie Watson and David Carroll, Walsh put in anywhere from 5 to 20 hours a week on the Spitzer project.

The team took all of the data Spitzer Space Telescope collected over its lifetime for the spectrograph and put together pieces like a puzzle, creating a way to sort the data. 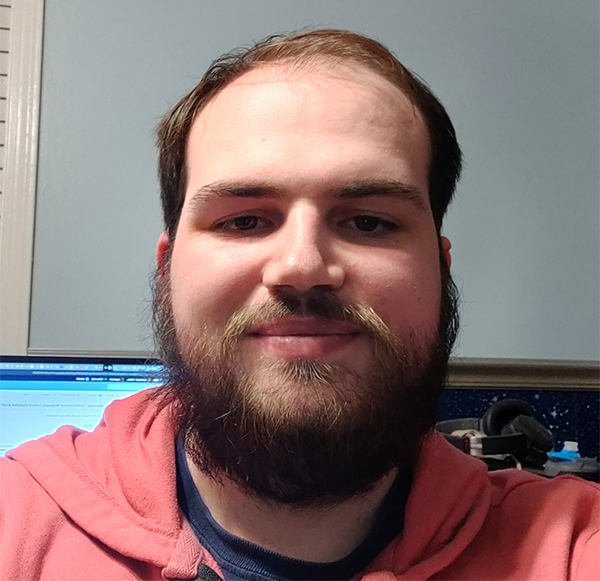 When the double major graduates May 7 with bachelor’s degrees in physics and mathematics, Teddy Walsh leaves behind his own legacy not only at UToledo, but in the field of astronomy.

“The telescope reader will tell us how intense it was at each wavelength. They don’t tell us the reading. We have to process the data and turn it into something — into the actual spectrum that we’ll use to do science with.”

“In addition to forming the science core of several planned graduate student theses, Teddy’s efforts with SIMLA will also have a major impact on our entire field as it gears up for incredible new scientific discoveries with the next great infrared space observatory — the James Webb Space Telescope,” Smith said.

Coding defined Walsh’s time at UToledo, but not only using Spitzer. He also had access to Lowell Discovery Telescope in Arizona through UToledo’s partnership with Lowell Observatory.

“We were able to have a night on it and use it to take pictures,” Walsh said. “In a class as part of our assignment we processed those pictures into final products.”

He also used the telescope at UToledo’s Ritter Observatory almost every week during his freshman and sophomore years as part of the Ritter Observing Team.

“Sometimes we had a specified target, but a lot of times we were able to use the telescope how you wanted and point it at any star or galaxy we wanted to,” Walsh said.

Outside of his academic efforts, he started volunteering his senior year with the UToledo student organization Food Recovery Network.

“We take leftover food from places like Barry Bagels, Panera and other local bakeries and bring it over to some of the homeless shelters throughout the city,” Walsh said. “It opened my eyes to the kind of help that UToledo organizations can give to the community.”

After spring commencement, Walsh plans to spend the summer continuing to work with Smith on the Spitzer project.

In the fall he will start the Ph.D. program in physics and astronomy at the University of Oklahoma.

“I’ll be eagerly watching his career develop to see what doors of discovery will be opened,” Smith said.

Looking ahead two years, Walsh said he plans to return to UToledo in 2024 for the total solar eclipse when campus will fall in the path of totality.