From Homeless to UToledo Graduate: “Education Saved Me”

When Lopez graduates this weekend with honors from The University of Toledo with bachelor’s degrees in physics and electrical engineering technology, each step he takes will carry a profound message for his children. And for anyone who may be in the throes of an especially trying time.

“You can overcome any obstacle if you so choose, but you’ve got to work for it,” Lopez said.

Lopez is living proof that determination and curiosity breed success.

The first person in his immediate family to graduate college, he has been accepted into UToledo’s Professional Science Master’s in Photovoltaics degree program.

“Education saved me,” Lopez said. “Sometimes I still feel like I am still running away from homelessness even though I am graduating with a double major and going straight into the master’s program. It is my education that is keeping me afloat.”

Working on solar technology research in UToledo’s Wright Center for Photovoltaics Innovation and Commercialization under the guidance of Dr. Randall Ellingson, professor in the Department of Physics and Astronomy, Lopez has come a long way from where he started.

“When I was a kid, I didn’t have direction,” Lopez said. “I graduated high school with a 1.8 GPA. My father ended up being sent to prison for a drug-related crime. My siblings and I lost the house we were living in. After that, I was bouncing back and forth from friend’s house to friend’s house for a year or two, living off of the generosity of friends.”

As a teen, in the worst time of his life, Lopez made a move that had a positive domino effect: He joined the U.S. Navy.

“I was homeless when I walked into the recruiting station,” Lopez said.

In boot camp, he tapped into his then-unknown leadership abilities.

“I was basically doing nothing before going into the Navy, and then being in charge of a division of 80 people,” Lopez said. 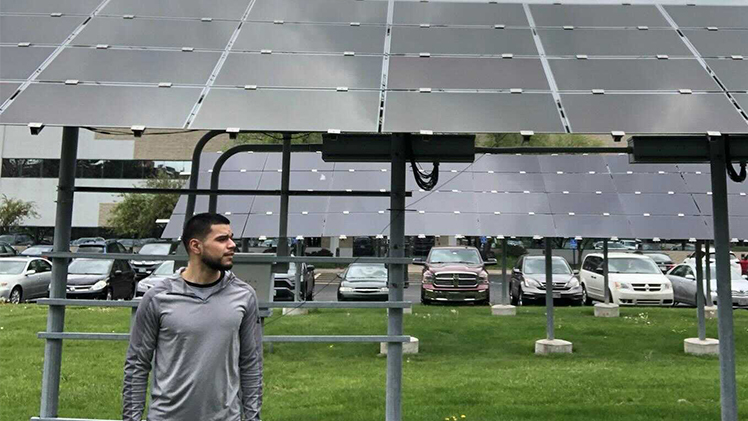 Working on solar technology research in UToledo’s Wright Center for Photovoltaics Innovation and Commercialization, Eulogio Lopez has come a long way in his personal and academic life.

He ended up becoming an aviation electrician, graduating second in his class at training school.

Lopez worked on the generator system for the F-18 aircraft while simultaneously taking classes at a community college in Virginia.

“I started to build my understanding of electrical theory, generator theory, and how physics plays into generating electricity,” Lopez said.

Lopez started diving into things that he always wondered about as a child.

For example, how does a digital clock work?

“I remember taking one apart and seeing the circuit boards inside there and wondering, ‘How is this thing producing a time?’ It always stuck with me,” Lopez said.

When he finished his service, he returned home to Toledo to continue what he started in the Navy and pursue a degree in electrical engineering technology at UToledo.

He began in fall 2016 with 18 credit hours already under his belt and the military covering his tuition. Taking six classes a semester over the next two years, he needed to figure out what to do next after finishing the electrical engineering program: Use the remaining military benefits or go straight into a career?

“Dr. Ellingson’s support has been extremely motivating,” Lopez said. “In his research, he works in partnership with national labs and the Air Force. He is part of a nonprofit called Glass City Community Solar that installs solar arrays on low-income housing. His connections and networking are exactly what I want to do to influence environmental, social and education policy and culture.”

“Eulogio builds upon his previous experience and success through determination, professionalism and a long-term view toward helping society,” said Ellingson. “These traits have led him to expand his skills and knowledge of solar energy — by learning not only about the practical aspects of how solar photovoltaic (PV) systems work but also by investigating and exploring the detailed science that governs PV technology.”

Lopez next begins his work as a research assistant in Ellingson’s lab.

He also plans to join the Glass City Community Solar team and talk with high school students about pursuing a career in STEM, which stands for science, technology, engineering and math.

“The next great scientist could be in the low-income housing,” Lopez said, “and all it takes is for them to be aware of the solar array on their roof.”