A team of University of Toledo students won third place in the U.S. Department of Energy’s 2021 Solar District Cup, competing against 28 other schools nationwide.

For the competition, hosted by the National Renewable Energy Laboratory, the solar team developed the knowledge and expertise needed to prepare a detailed project proposal for solar energy arrays and electrical energy storage for the University of Central Florida’s campus. 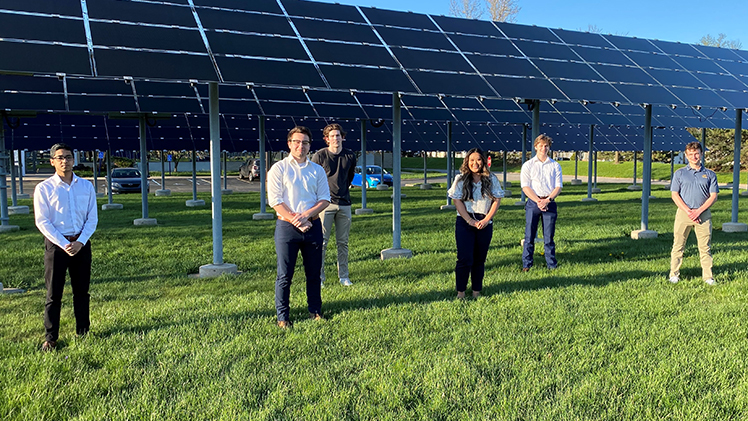 The UToledo student team pitched their proposal, which included four large solar arrays and a significant energy storage system, live on April 25 from the UToledo campus via a web conference open to the public and evaluated by four judges selected by the Solar Cup’s organizers.  The solar energy technologies that generate electricity from sunlight are also known as photovoltaics, or PV for short.

•  Samuel Seibert, a junior in physics;

•  Andrea Vankham, a senior in finance;

•  Sanat Wagh, a junior in finance; and

“The opportunity to work with some of the brightest and most dedicated students at UToledo on such a large project was an honor,” said Seibert, the project’s co-captain, along with Nieschwitz, as well the lead presenter for the project overall.

“Being the captain of this team allowed Kristof and me to see firsthand the intelligence and dedication of these students, and it never felt as though any one student alone carried the project. It was an amazing collaborative effort between students of different majors and skill sets to prepare the best representation of what UT can do.”

“This diverse student team,” Ellingson said, “was ideal for addressing the proposal requirements that included technical analysis of the solar energy resource, the impact of adding solar photovoltaic arrays to the campus electrical grid, planning for permitting and code compliance, and developing a construction plan.

“Together with the technical analysis, the financial models developed by the finance students working with Prof. Gilstrap yielded a highly informative and professional cost proposal.”

“The business case provided by the Solar District Cup gave the students a real-world look at the finance behind solar field development,” Gilstrap said. “Shortly after the competition we were approached by an investment bank looking for solar development analysts from our finance students, and I believe this competition has given our students the big picture in renewable energy finance.”

The PV industry has already reached $170 billion in annual sales in 2020 and is expected to exceed $300 billion before the end of the decade.  Relying on sunlight instead of fossil fuels such as coal or natural gas, PV has now become the fastest-growing low-carbon electricity source.  The transportation industry is also experiencing a transition towards electrification, which allows for “fueling” from clean electricity sources such as solar and wind.  Gasoline fuel supply problems such as the one caused by the recent ransomware attack suffered by Colonial Pipeline do not impact drivers of electric vehicles.

Students with the skills and knowledge developed in the US Dept. of Energy’s Solar District Cup can explore careers in PV that assist in the clean energy transition, engaging in an industry with a critical role to play in reducing carbon emissions and slowing or reversing climate change.

The faculty advisors agreed that the student team’s performance was very impressive and that they should be proud of the strong teamwork, persistent dedication and clear communication necessary over eight months to achieve this strong performance.

“Ultimately, the students had fun getting to know each other, meeting on a regular basis, and learning from each other,” Ellingson said.

The Building Ohio’s Sustainable Energy Future scholarship and student program is designed to increase the number of Ohio resident students majoring in areas of the sciences and engineering important to the development of renewable energy technologies and environmental sustainability.

The UToledo team will receive a unique trophy to commemorate their success, and the team is working out a campus location for the display.