Dr. Joey Kim’s first book of poetry has poetic timing as Asian Americans have been targets of violence across the U.S. during the COVID-19 pandemic. 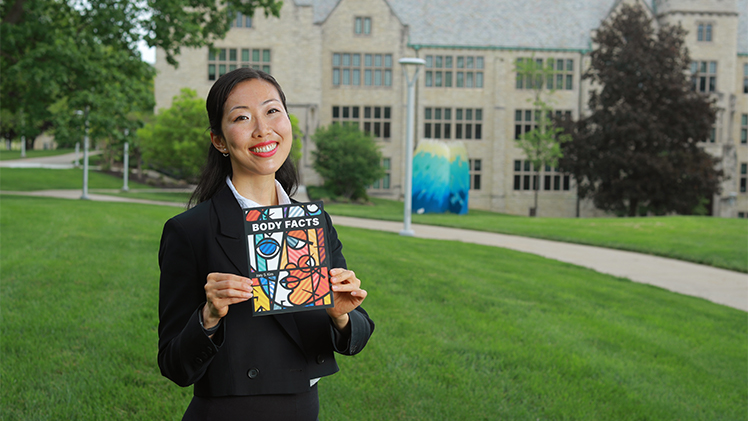 For 13 years, Dr. Joey Kim has been writing a collection of poems that would become her first book of poetry, ‘Body Facts.’ Kim’s book won an international publication contest last year and will be released by Diode Editions on June 15.

“It’s urgent,” said Kim, assistant professor in the Department of English Language and Literature in The University of Toledo College of Arts and Letters. “Asians have been here in the U.S. since the 1500s, but it hasn’t been until recently that there has been a national reckoning of Asian Americans as not perpetual foreigners.”

Writing the poems over the last 13 years was therapeutic for the Asian American scholar.

Using tweets from former President Donald Trump and comments from childhood neighbors and classmates, Kim found a place to unpack her identity, the double consciousness of growing up in two cultures at once, the accrual of racist encounters and the historical and generational impacts of war and colonization.

“My collection is able to put a face and a name and a story to these voices,” Kim said. “These voices speak back to a history of Asian American representations that have largely been essentializing and stereotypical.”

Kim grew up in Ohio as the daughter of doctors, who were immigrants from South Korea, and speaking Korean as her first language.

She wanted to be a writer, not a doctor, while white neighbors and classmates wanted to know where she was really from.

From the poem “Orientalism,” Kim quotes childhood classmates on the school bus:

“Where are you really really from?

Your face is flat like a plate! Ching-chong Donkey Kong!”

How do I get to where I really came from, if I’ve only ever been here, in Ohio?

In the same poem, she quotes Trump’s response after being asked by a reporter whether he plans to attack North Korea.

If this land is a land for me, and the ones like me who can only spectate in

spectral horror — while he tweets us into oblivion.

“My poems speak to psychological effects of growing up in places where you always have to try to maneuver these different cultures,” Kim said.

“Plunder,” one of the poems in the collection, has already been nominated for a Pushcart Prize, a prestigious national literary award given out annually since 1976.  Kim also won first place in the Art Commission’s 2020 Merit Awards.

“The inspiration behind ‘Plunder’ is the dispossession of Korean land and bodies during the Japanese occupation and Korean war, which is still technically ongoing,” Kim said. “The poem interlaces the speaker’s childhood memories, American plastic surgery experimentation on Korean subjects, and the fetishization of women’s faces and bodies as objects to be modified and plundered.”

In her collection, Kim writes from different perspectives of the body — body as human and the pressures people place on their bodies, or body as land, the Korean Peninsula, to be exact.

“We are still occupied by U.S. forces and in the shadow of American imperialism,” Kim said. “In one of the poems, I talk about the Trump era of Korean discourse and our sense, as Korean Americans, of feeling stereotyped with North Korean dictatorship.”

The poetry expands beyond “slurs,” “slit eyes” and foreign policy. When Kim talks about the body as a site of celebration and trauma, she also is reflecting on the brain hemorrhage and traumatic brain injury she suffered while skateboarding in May 2015.

She had only been skateboarding for a couple of months while in graduate school at Ohio State University before she became a Ph.D. candidate when she took off her helmet and tried to go down a hill at a skatepark by herself.

“I was in the ICU for 11 days. At first, the doctors told my family I most likely wouldn’t be able to walk or talk in the same way again,” Kim said. “Because of my youth, I had, in the words of my neurosurgeon, a ‘miraculous’ recovery. My hearing is back, too.”

“Our bodies hold and hide our histories,” said Min Jin Lee, author of “Free Food for Millionaires” and “Pachinko,” a National Book Award Finalist. “Line by line, Joey Kim breaks us open to expose our yearnings, secrets, and untold treasures, saving us from our own fortress of history, propriety, and shame. Kim’s ‘Body Facts’ is our needed revelation.”

“Kim’s work, from multiple angles, portrays the ways in which peace and beauty are forced to find new escapes from tyrants and the fallouts of their power,” said Marcus Jackson, author of “Pardon My Heart,” the 2019 Ohioana Book Award winner for poetry. “Kim admirably illustrates present and historical threats, all while rendering the ageless brilliance of family and spirit.”