This month a team of art, environmental science and engineering students at The University of Toledo named LumniArbor will compete in the international Biodesign Challenge competition using its concept of bioluminescent trees as a solution for both light pollution and the lack of lighting in regions of the world with limited resources. 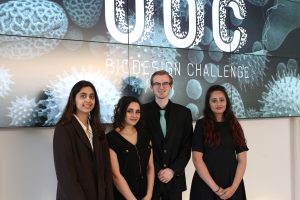 UToledo’s LumniArbor team will compete in the international Biodesign Challenge competition using its concept of bioluminescent trees as a solution for both light pollution and the lack of lighting in regions of the world with limited resources. The team includes Chinmaya, a bioengineering major; Alex Mcdonnell, environmental studies major; Nash Benton, civil engineering major; and Huriyyah Chaudhry, bioengineering major.

The trees, which would be genetically altered to have bioluminescent leaves, would replace existing outdoor lighting in a speculative future. The team argued that, while being bright enough to see by, they would not interfere with the circadian rhythms of nocturnal plants and animals, unlike electrical lighting.

LuminArbor next competes against 54 teams from 18 countries June 20-24.

Students from UToledo prepare for the competition every year through a class offered in the Department of Art taught by Eric Zeigler and Brian Carpenter. The Biodesign Challenge course offers Art, Bioengineering, Environmental Sciences, Civil and Environmental Engineering, and Honors students the opportunity to envision future applications of biotechnology and biomaterials that address complex global challenges.

Students are connected to community experts to develop innovative solutions through interdisciplinary research and iterative prototyping.

This year four teams competed to see which team delivered the best concept for using art, design, science and bioengineering to resolve a real-world problem of their choice.

Another team, Nella Cell, developed a concept for using microorganisms to extract microplastics that leach out of our laundry into the environment. Their composting device, the Nella Cell, also will compete at the international Biodesign Challenge for the Science Sandbox Prize for Public Engagement. This prize is awarded to the team whose project best explores the multitude of impacts biotechnology can have on society. 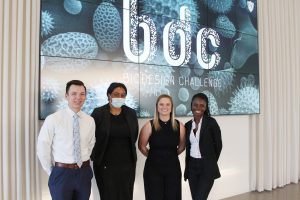 The other teams competing this year were VerdeTent, which developed a biodegradable tent that could be utilized by people experiencing homelessness, and Indisposable, which improved upon the burial process for humans by repurposing former industrial sites as places where human remains could be safely composted and provide people with a location to visit their deceased loved ones.

Jurors for the 2022 UToledo Biodesign Challenge were:

• Dr. Jonathan Bossenbroek, chair of the UToledo Department of Environmental Sciences and professor of ecology;

• Dr. Melissa Valiska Gregory, interim dean of the UToledo College of Arts and Letters and professor of English;

• Dr. Adam Levine, director of the Toledo Museum of Art;

• Barbara Miner, professor and chair of the UToledo Department of Art;

• Dr. Michael Toole, dean of the UToledo College of Engineering; and