Former Toledo women’s basketball player Mariella Santucci has signed a professional contract to play for Passalacqua Ragusa in her home country of Italy. 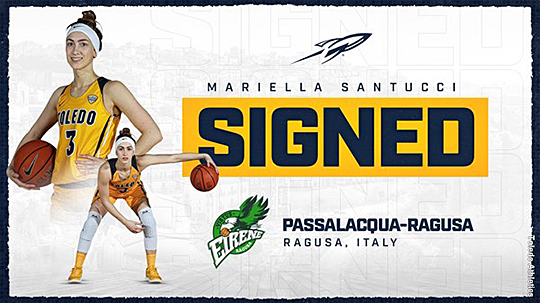 In addition, former Rockets Kaayla McIntyre, Janelle Reed-Lewis, Dortch and Harris currently play for the Toledo Threat, which is part of the Women’s Professional Basketball Organization.

“Since the first day Mariella stepped on campus at Toledo, it was her goal to play professionally,” Cullop said. “I’m incredibly happy to see her goal become a reality. We’re so appreciative of the hard work, dedication and leadership that she brought to our program, and I now look forward to becoming a fan of Passalacqua Ragusa and cheering for her.”

Passalacqua Ragusa plays in Italian-Serie A1, the premier national league for women’s basketball clubs in Italy.

A 2019-20 team captain, Santucci scored in double figures on 16 occasions during her final season wearing the Midnight Blue and Gold, the third-highest total on the team, including a career-best 31 points against Miami.