UToledo Physician Raises Money for Nepal While on Mount Everest

As Dr. Kristopher Brickman sat in a cold tent at the foot of Mount Everest, trying to acclimate to the high altitude, wiping frost off his face every morning and reflecting on the deepening COVID-19 crisis in Nepal, he decided it was time to bring his once-in-a-lifetime adventure to a close.

An emergency medicine specialist and professor and senior associate dean for innovation and simulation in The University of Toledo College of Medicine and Life Sciences, Brickman had spent the last six weeks chasing a dream of summiting the world’s tallest mountain. 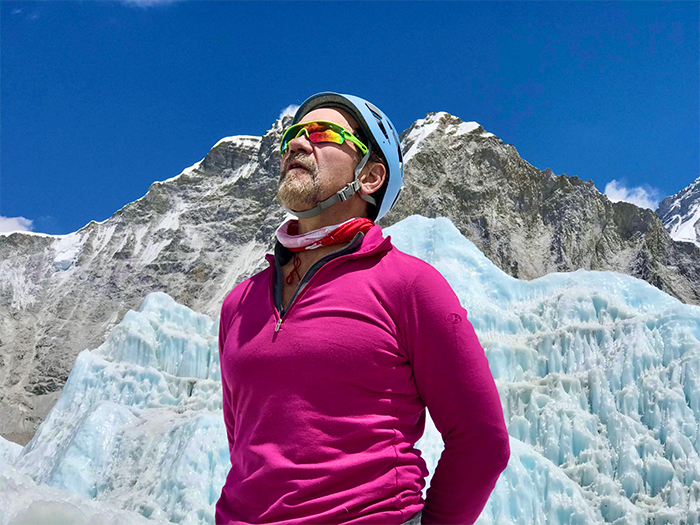 Dr. Kristopher Brickman trekked 45 miles to get to Everest Base Camp and then climbed sheer ice walls on the mountain, reaching elevations of nearly 23,000 feet.

He’d trekked 45 miles to get to Everest Base Camp and then climbed sheer ice walls on the mountain, reaching elevations of nearly 23,000 feet.

But now it was time to do what he could to assist with the pandemic response in one of the world’s poorest countries.

“I gave the mountain everything that I had,” he said. “It was just the right thing to do. I knew I had a better calling than to stumble up that mountain for the next two weeks. My colleagues down in Kathmandu were struggling. They needed help.”

When Brickman left Toledo for South Asia, COVID-19 cases in Nepal were at their lowest level since the pandemic began. By early May, however, Nepal and bordering India were the epicenter of the pandemic.

Before he left, Brickman set up a nonprofit through the Greater Toledo Community Foundation to provide financial aid to Nepal’s medical community through donations of people who were following his journey. The charity ultimately raised several thousand dollars, but as the COVID-19 situation worsened, Brickman also collected donations from fellow climbers and reached into his own pocket to purchase critically needed high-flow oxygen equipment for Dhulikhel Hospital in Kathmandu.

Once off the mountain, he returned to the Nepalese capital for a week to help train physicians and hospital staff on their new life-saving medical equipment.

“What I contributed was a fraction of what they needed, but no one else on the mountain could help with the pandemic. I knew that I could,” he said. “To me, I always feel like there’s a purpose in why you end up where you’re at and what you’re doing — maybe that’s why I’m here.”

Brickman’s introduction to Nepal came six years ago when he joined a medical relief effort following a devastating earthquake that killed some 9,000 people and injured an estimated 22,000.

In the years since he has had traveled to the country nearly a dozen times for relief missions and established an exchange program for UToledo medical residents to spend a month training at Dhulikhel Hospital-Kathmandu University Hospital School of Medicine. 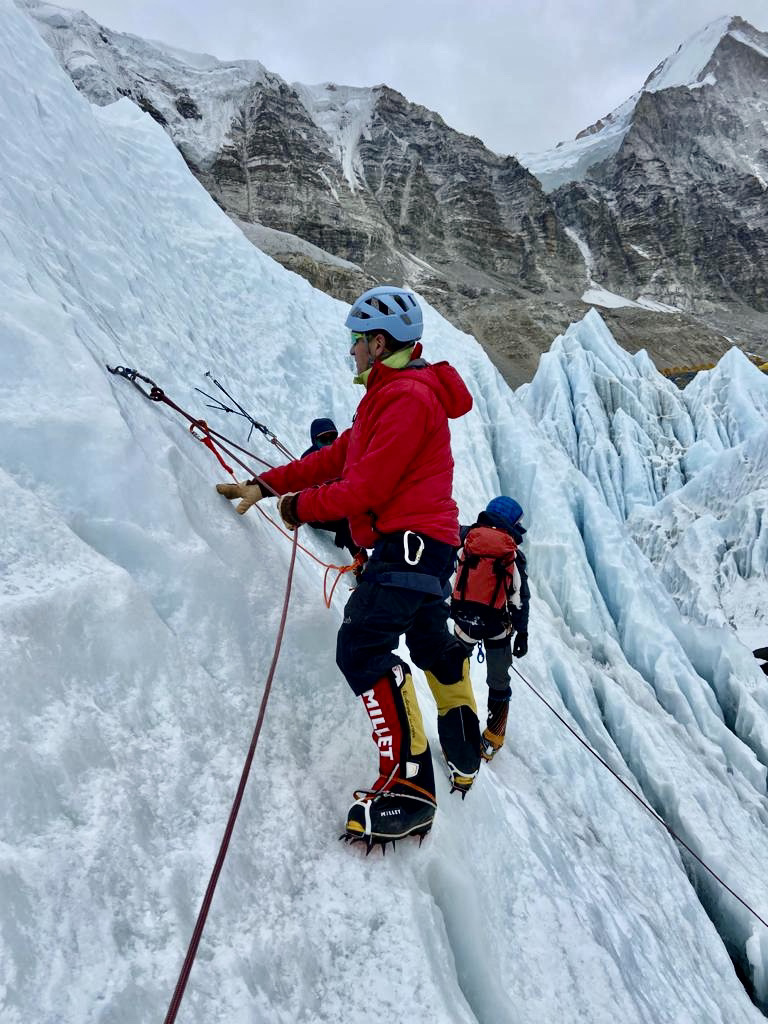 Though he summited Kilimanjaro in Tanzania several years ago, Brickman was a novice among the seasoned climbers on his guided climb.

Those trips emboldened Brickman’s desire to climb the 29,032-foot mountain. Climbing Everest, however, isn’t as simple as showing up in Nepal or China with a backpack full of gear and an adventurer’s heart.

Brickman worked with a U.S.-based company that provides guided climbs, and even getting a spot on one of their trips took some convincing. Though he summited Kilimanjaro in Tanzania several years ago, Brickman was a novice among the seasoned climbers who make up their expeditions.

To prepare for Everest, he linked up with a former mountain guide on a series of climbs across the United States. They scaled New Hampshire’s Mount Washington in minus 30-degree temperatures, practiced technical skills at Seneca Rocks in West Virginia and went ice climbing near Montrose, Colo.

Then, a week before he was to leave for the climb, COVID-19 hit, pushing his journey to the next climbing season.

Undeterred Brickman arrived in Nepal this March, fully vaccinated and armed with COVID-19 testing supplies for his team and the Sherpas who would help them, to finally attempt the ascent.

But one of the most serious threats comes from the high altitude. Base camp is at 18,000 feet, which is nearly 3,500 feet higher than the tallest mountain in the continental United States. At that altitude, oxygen is scarce, and the lower air pressure can cause fluid to build up in a climber’s body.

That was the most challenging part for Brickman, who struggled with altitude sickness and fluid buildup in his lungs.

“I clearly went in knowing all the stars would have to align for me to get to the top. I didn’t go in defeated, expecting that I’m not going to make it, but I was realistic about my chances,” he said.

While Brickman made it through some of the most technically difficult parts of the mountain, the altitude sickness was too much to overcome as he reached 23,000 feet.

Even without making it to the top — a feat fewer than 6,000 people have ever accomplished — the experience was everything he hoped it would be, he said.

“It was physically, emotionally, spiritually — whatever you want to call it — an incredible experience. I climbed Everest. That’s all I was there to do. I don’t feel I was any less accomplished because I didn’t make it to the top. I had an amazing experience with the icons of mountaineering.”