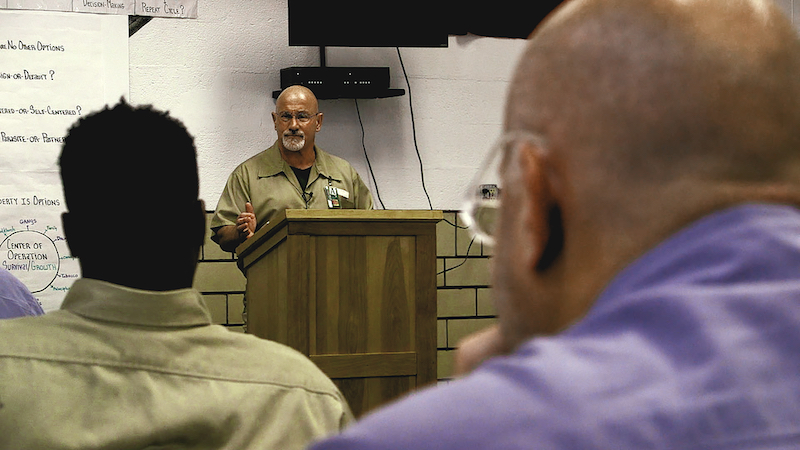 “The film reveals how Larry came to be incarcerated for more than half of his adult life, Joe’s commitment to loving the unlovable and the ways in which our judicial system fails to recognize reform beyond time served,” Hey said.

Hey led an internship for six UToledo film and video majors who helped develop and shoot the film during the summer of 2019. The students’ pre-professional, work-based experience at UToledo led to showcasing their work to a national audience as the film has broadcast in several states around the country.

“Working on this project was a real eye-opening experience, as a filmmaker, as a storyteller and as a person questioning the purpose and goal of incarceration: Is it to punish or to rehabilitate?” said Ali Moussa, a 2020 UToledo graduate who operated first camera on the documentary.

Senior United States District Judge Jack Zouhary, who helped Hey get access to Thompson inside Marion Correctional Institution in Marion, Ohio, for an hourlong interview and to capture additional footage of Thompson teaching his Reentry Realities class, is scheduled to participate in the Facebook Live discussion following the public broadcast of the documentary on WGTE.

“I have known Larry for nearly nine years, and his rehabilitation efforts while incarcerated are the most impressive I have seen in my sixteen-year involvement with criminal justice reform,” Zouhary said. “His story is a ‘must see’ for lawyers, judges and anyone interested in learning about the reality of reentry.”

“This new program by Holly Hey demonstrates a complete human soul — Larry Thompson,” said Cathy Kamenca, TV program coordinator for WGTE. “He is not perfect, but with his imperfections that have led him to prison, he uses his heart and knowledge to help other inmates believe in themselves, giving them a fighting chance once they do get out of prison. The film reminds you to take a deeper look into someone, and not judge so harshly.”

Hey also collaborated with UToledo’s College of Arts and Letters and College of Law to produce the film. The colleges financed the project in the hopes of bringing visibility to Thompson’s story and his request for judicial release.

Hey developed a study guide with Salem and Heberle that helps frame discussions around our judicial system, rehabilitation, relationships across walls and Thompson and Hoeflinger ’s work in reentry. The study guide can be found on the film’s webpage.

“Reentry Realities, Hope Deferred” is distributed by the National Educational Telecommunicaitons Association (NETA), delivering more than 1,200 hours of media programming a year to 277-member public television stations in 46 states, the Virgin Islands and the District of Columbia.