As harmful algal blooms have become an annual event in freshwater lakes across the world, knowing who is most susceptible to the toxins they produce is critical for safeguarding public health.

Joshua Breidenbach, a Ph.D. student studying medical microbiology and immunology in The University of Toledo College of Medicine and Life Sciences, is determined to provide some of those answers. 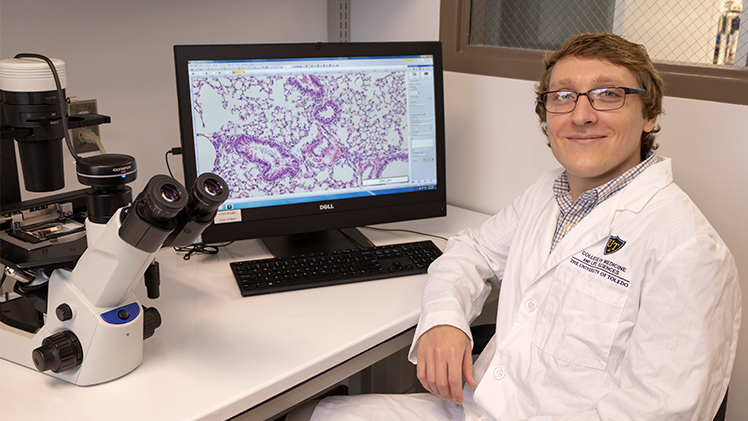 Joshua Breidenbach, a Ph.D. student in the College of Medicine and Life Sciences, is researching how cyanotoxins dispersed into the air during harmful algal blooms affect individuals with asthma.

“A lot of the existing guidance is based on healthy individuals, but I think we all know that not everyone is healthy,” Breidenbach said. “That’s something we really focus on in this lab. Is there a preexisting, at-risk population that should be more aware of environmental risks? That’s really important for us to consider.”

Working under the mentorship of Dr. David Kennedy and Dr. Steven Haller, both associate professors of medicine, Breidenbach’s research is aimed at better understanding how individuals with asthma are affected by the cyanotoxins that get dispersed into the air during harmful algal blooms.

The team has already shown that cells on the inside layer of the lung become inflamed when exposed to aerosolized microcystin.

Further research is aimed at determining how the body’s network of immune cells respond to that initial exposure in order to more fully understand the increased risk of microcystin exposure to individuals with asthma.

“Asthma is one of the most prevalent airway diseases, but it’s also primarily inflammation based,” Breidenbach said. “This research is to see if there is a connection between the preexisting inflammatory airway state in asthma and the inflammation that aerosolized microcystin seems to cause.”

Through the fellowship award, Breidenbach also will be mentored by faculty from the UToledo departments of pathology, chemistry and pharmacology, as well as researchers at the Lawrence Livermore National Laboratory, the Pacific Northwest National Laboratory, University of Michigan and Wayne State University.

“In the end, we’ll answer a scientific question, but equally importantly we’ll have a scientist who now can go and answer the next big question that comes along because he’ll be trained in the best methods,” Haller said. “This award is really about his development as an academic and independent researcher.”

A Bascom, Ohio, native who earned bachelor’s and master’s degrees from UToledo, Breidenbach is one of two students in the College of Medicine and Life Sciences to earn the prestigious F31 fellowship.

Rachel Golonka, a Ph.D. student in the Department of Physiology and Pharmacology who is studying how altered gut bacteria can change the type of immune cells in the liver and potentially lead to liver cancer, also earned an F31 Ruth L. Kirschstein National Research Service Award.

For Breidenbach, understanding how microcystin may disproportionally affect those with asthma is more than just an important scientific question in the abstract. Not only is Toledo one of the largest American cities that contend with annual harmful algal blooms, but his fiancé suffers from severe asthma.

“These things are real,” he said. “You have people who have asthma and it’s kept under control by rescue inhalers. But there are situations they can’t control that might make things worse. It hits close to home.”

The researchers hope the ongoing work, which will include state-of-the-art 3D cell culture models that mimic the lining of human lungs, will provide insight that can guide public policy decisions and improve the human condition.

“We have a problem that’s in our backyard, but the problem isn’t just in our backyard — it’s a global problem,” Kennedy said. “Josh will be creating a fundamental understanding of how the lungs respond to aerosolized microcystin and that knowledge may help in the creation of therapeutics that we can one day use to help treat people.”

The research is also supported by funding from the Ohio Department of Higher Education Harmful Algal Bloom Research Initiative.