Sometimes it’s all about being in the right place at the right time — and grabbing the opportunity that’s been handed to you. Charles Vogel calls it serendipity.

In Vogel’s freshman year at The University of Toledo, a teaching assistant in his statistics course asked if he wanted to participate in the InSPHIRe lab. Vogel, a premed psychology student at the time, didn’t even know what the lab was. 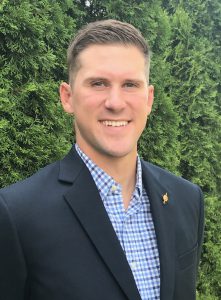 Seven years later, he can rattle off the lab’s full name with ease — the Integrating Social Psychology and Health in Research lab.

Vogel spent three years in the lab as an undergraduate, studying the nocebo effect and how it alters perceptions of pain. (The nocebo effect, the opposite of the placebo effect, is when negative expectations can make you feel worse.) His team presented their research at conferences and even published a paper in the Journal of Pain in 2019, a coup for an undergraduate.

“I was young and more eager to be involved on campus,” he said. “As a research assistant, I fell in love with it.”

Along the way, Vogel learned he was more interested in social behavior and psychology than medicine. He wanted to focus more on child behavior, so branched out to work in the Forensic Developmental Psychology Lab and the Child Anxiety and Stress Lab.

After he graduated with his bachelor’s degree in 2018, he started graduate school. He is now a third-year graduate student in UToledo’s Education Specialist School Psychology program.

He is still conducting research. For the past two years, as a graduate assistant in Dr. Jennifer Reynolds’ lab, he has studied nearly 800 math students in the Fostoria, Ohio, school system. His team studies how fluency with math facts affects future abilities in math and helps schools provide and monitor interventions for their students.

“My undergraduate research gave me a perspective that a lot of other students didn’t have. I got to hone my skills,” Vogel said. “At the graduate level, [my research is] preparing me as a consultant, who would be responsible for collecting data and talking to teachers and administrators about how to use the data to guide decision making. I’m getting experience with working with staff at Fostoria. That’s what school psychologists do.”

Reynolds, program director of the school psychology program, was one of the first people Vogel reached out to when he was considering graduate school.

“Charles is one of the kindest, hardest working, most dedicated and positive students I have worked with,” Reynolds said. “Most importantly, as a first- and second-year student he positively impacted the life of numerous children in multiple school districts ― including my sons — through field experiences and research endeavors. Charles is, and will continue to be, an asset to the field and community.”

Vogel grew up in a household of educators and nurses, he said. His mom is a junior high English teacher in Bedford, Mich.

“She’s passionate about helping students and people,” he said. “I want to use my knowledge of psychology to help students in similar ways.”

Vogel said he’d like to focus on younger children as a public school psychologist.

“I really like school-age kids, K through 5. I can be a lot more involved with intervention at that level,” he said. “And little kids are just funny. They’re so honest and have so much potential. I like how they explore things in their environment and interact with each other. It’s like watching The Office.”

Vogel said he has always been a curious student, eager to learn more about things that fascinate him — and people fascinate him.

“People find ways to alienate one another. But in a psychologist’s eyes, we’re more alike than we are different,” he said, “It’s that commonality I find a lot of hope in.”

Finding common ground and increasing cultural diversity is one of the goals of UToledo’s School Psychology Student Organization, which Vogel served as president last year. The group of about 25 students works on professional development and raises funds for their organization and other nonprofits. Vogel has volunteered at the Glass City Marathon and organized the group’s first Relay for Life team for the American Cancer Society.

“Being part of a student-led organization teaches you communication skills and to collaborate with people of different backgrounds,” he said. “You get to build leadership skills and fulfill roles you wouldn’t get to just going to class or to practicum sites.”

Vogel is scheduled to graduate in spring 2021. As he looks back on the seven years he’s spent at UToledo, he’s grateful for the way the University prepared him for his professional life. But he also sees that it’s done much more than that.

“I didn’t just go to UToledo because of classes,” he said. “It’s the relationships I’ve had with staff and faculty. I’ve always had a network of support that’s allowed me to be successful. It wasn’t necessarily easy to build those networks. You had to seek them out, but the opportunities are there, and I’ll always be appreciative of that. If it wasn’t for the grad student who asked me to be involved in the research lab, I might never have known about that lab.”

And the world might have had one more doctor instead of a school psychologist.