Toledo and Bowling Green will meet on the gridiron for the 84th time when the Rockets invade Doyt Perry Stadium Saturday, Oct. 12.

The Rockets and the Falcons first played a football game on BGSU’s campus in 1919, making Saturday’s game the 100th anniversary of that first meeting. This will be the 84th meeting between Toledo and Bowling Green; the two campuses are separated by a 20-mile stretch of I-75. 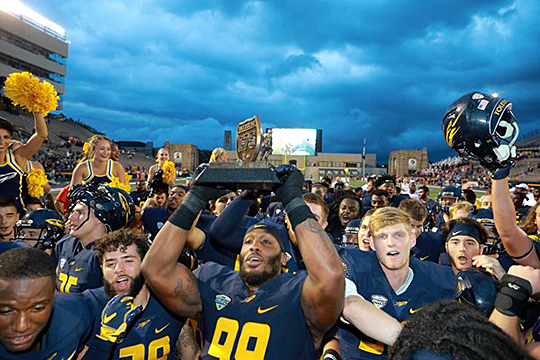 The Rockets claimed the Battle of I-75 Trophy in 2018. It was their ninth straight win in the series with Bowling Green.

Kickoff is scheduled for noon, and the game will be carried on the CBS Sports Network.

Toledo (4-1, 1-0 Mid-American Conference) comes into the contest with a four-game winning streak, most recently a nail-biting 31-24 triumph over Western Michigan Oct. 5 before a Homecoming crowd of 22,141 at the Glass Bowl. Senior quarterback Mitchell threw for two touchdowns and ran for two more to lead the Rockets, but the outcome of the victory was not settled until the game’s final possession. Clinging to a 31-24 edge, the Rockets stopped the Broncos on fourth-and-22 from the UToledo 24-yard line when WMU quarterback Jon Wassink was tackled two yards shy of the first down by sophomore linebacker Saeed Holt with 1:44 left. Toledo was able to get a pair of first downs on carries by sophomore Bryant Koback to run out the clock and claim the victory.

Bowling Green (1-4, 0-1 MAC) is coming off a 52-0 loss at No. 9 Notre Dame Oct. 5. After a season-opening win over Morgan State, the Falcons have lost consecutive games to Kansas State, Louisiana Tech, Kent State and Notre Dame. BGSU’s top offensive player has been junior wide receiver Quintin Morris, who has 26 receptions for 310 yards and two touchdowns.

For the eighth time in the history of the rivalry, the winner of the game will hoist the Battle of I-75 Trophy. The trophy was officially awarded to UToledo in 2011 following its 28-21 win, but the trophy was not completed in time for the game.