Toledo (4-2, 1-1 Mid-American Conference) will play Ball State Saturday, Oct. 19, at 2 p.m. in Schuemann Stadium in Muncie, Ind. The Rockets are looking to get back on the winning track following last week’s 20-7 loss at Bowling Green.

The defeat snapped a four-game Rocket winning streak and left Toledo in the middle of the pack in the MAC West Division with a 1-1 league record. 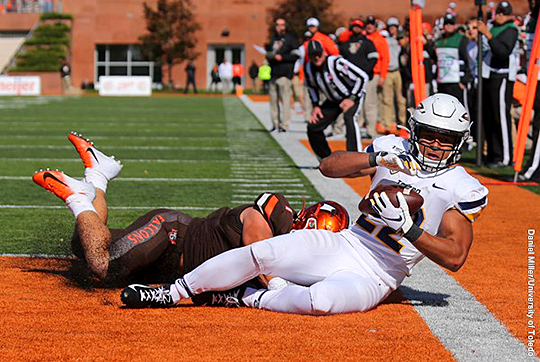 Toledo fell behind early and could never get rolling against the Falcons. Bowling Green scored the first 10 points of the game and led at halftime, 17-7. Total yardage in the game was about even, with the Falcons outgaining the Rockets, 425-392, but BG made big plays on special teams, blocking a punt and a field-goal attempt.

Senior quarterback Mitchell Guadagni completed 17 of 20 passes for 194 yards, but left the game in the third quarter with an apparent injury. His status for the Ball State game is not known. Sophomore Bryant Koback led the rushing attack with 60 yards on 14 attempts.

Ball State (3-3, 2-0) opened up the conference season with consecutive road wins over Northern Illinois (27-20) and Eastern Michigan (29-23) to move into first place in the MAC West Division.

The Cardinals are led by junior quarterback Drew Plitt, who paces the MAC with 277.0 passing yards per game. Plitt has completed 65.8 percent of his passes and thrown for 13 touchdowns. Ball State’s leading rusher is junior Caleb Huntley, who ran for 152 yards in the Cardinals’ win over EMU and ranks fifth in the league with 98.7 yards per game.