How does a student who lives in the Democratic Republic of the Congo, more than 7,000 miles from Ohio, end up in pharmacy school at The University of Toledo?

For 23-year-old Isaac Kaba, an honors student who transferred this fall to UToledo from the University of Kinshasa, the answer involves a scholarship, a UToledo professor and a hunger to learn more. 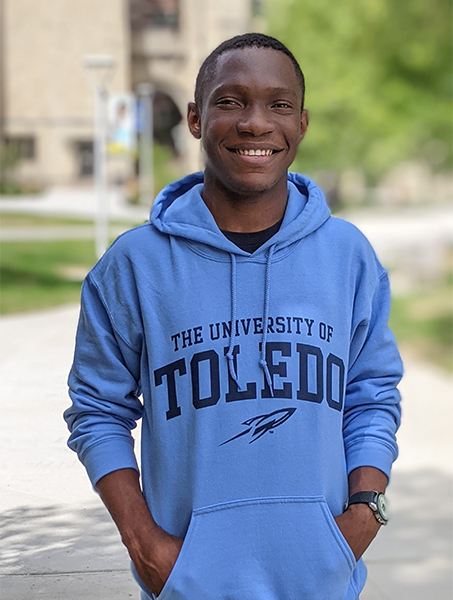 After researching U.S. pharmacy programs, Isaac Kaba, a 23-year-old honors student, transferred this fall to UToledo from the University of Kinshasa in the Democratic Republic of the Congo.

A few years ago, Kaba received a scholarship from a nonprofit called STEM DRC Initiative to support his studies at the University of Kinshasa in the DR Congo.

Kaba learned that the nonprofit was started by Ngalula Mubenga, who founded the organization to promote STEM education in her home country. She also just happens to be an assistant professor in engineering technology at UToledo.

It was the first time Kaba had ever heard of The University of Toledo.

During COVID, while Kaba was on hiatus from his college studies in pharmacy in Kinshasa, he started planning with a friend in Vermont how to pursue his education in the United States. His brother, who studies at Grand Rapids Community College in Grand Rapids, Mich., had urged his younger sibling to consider joining him in the U.S.

When Kaba researched American pharmacy programs, he found out UToledo had one of the top programs in Ohio and in the country. He recalled that Mubenga had attended UToledo.

His interest in the Rockets was cemented when his Vermont friend also recommended UToledo. He decided to apply.

Kaba sent his transcripts to Ghana to be translated from French into English. Working with UToledo’s international office, he provided additional documents and course syllabi to figure out how many of his credits would transfer.

He applied in May and within two weeks, he had been accepted.

“I was surprised I heard so quickly,” he said. “It was a quick process. I called and texted, and always got a good response. Everyone was really helpful.”

Victor Finch, UToledo director of international admissions, was impressed by Kaba’s persistence throughout the admission process.

“Undergraduate students from this part of the world have a less than 10 percent chance of being approved to study in the United States,” Finch said. “Isaac and I emailed, had Zoom meetings and connected through WhatsApp throughout the entire process. Isaac handled the entry process to get into the Unites States, his quarantine, finding a place to live and getting his vaccination all in stride.”

Kaba was able to transfer 155 of his credits and is considered a senior. But because the science classes he took in the DR Congo are considered electives in the U.S., he has to take some labs before he’s fully admitted to the professional portion of the Pharm.D. program.

Throughout his academic career, Kaba has been an enthusiastic, ambitious student. He is dedicated to his studies ― often the top student in his classes ― as well as leadership and community engagement.

He was selected for the Congo Leadership Initiative in 2013, an effort to empower young Congolese in leadership and entrepreneurship. While at university, he interned at a pharmacy and founded the National Association of Pharmacy Students, becoming its general secretary.

“I love being involved in my community,” he said.

Not one to sit idle, Kaba decided to do some research while his classes were suspended during COVID.

“I saw my grandparents treat skin problems with medicinal plants,” he said. “Congo is a country of biodiversity. I am interested in natural product research.”

A professor helped him launch his research project to see what compounds in the plants helped treat skin issues.

“I found that medicinal plants had strong powers, antibacterial and antioxidant activity that justified their use for skin disease,” Kaba said.

His team’s research was published last year in the Journal of Biosciences and Medicines. Kaba was listed as lead author.

It’s his interest in research that impressed Dr. Heidi Appel, dean of the Jesup Scott Honors College. She met Kaba at an event for potential honors students this fall.

“When Isaac talked about his undergraduate research, his face lit up,” she said, “and I knew he belonged in the Honors College. We’re so thrilled that he’s now an Honors Rocket.”

Kaba hopes to move forward with his research at UToledo. He recently was accepted into the lab of Dr. Ghassan Abushaikha, a research assistant professor in the College of Pharmacy.

“I would like to go back to my country, bring back what I learned here,” he said, “and innovate and improve the pharmaceutical field there.”

To celebrate current UToledo students who have transferred to the University from other colleges or universities, UToledo will pass out T-shirts and host other on-campus activities during National Transfer Student Week, Oct. 18-22. Check Invonet for a complete list of activities.