When you’re obsessed with cosmetics and chemistry, there’s really just one major and one university that check all the boxes.

Raihaanah Safee knew in high school that The University of Toledo was that university ― and that cosmetic science and formulation design would be that major. 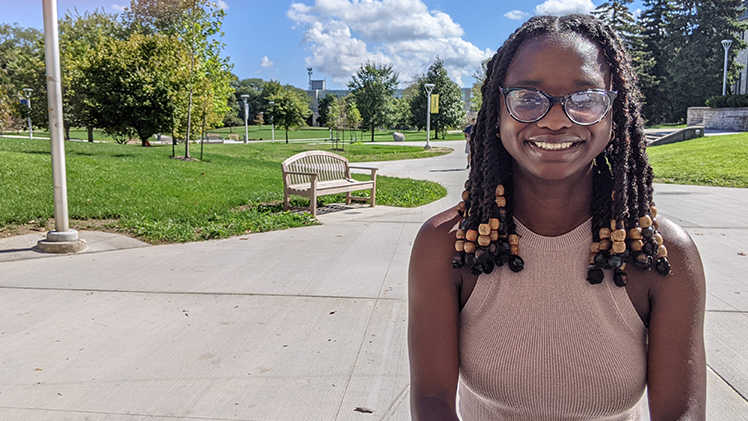 Raihaanah Safee transferred to UToledo in 2019 with 60 credits, a 4.0 GPA and a generous scholarship. She is scheduled to graduate this spring with her bachelor’s.

“I was searching one day on the internet and found the cosmetic science program,” the Detroit native said. “I went to the pharmacy summer camp, and that secured my interest.”

Safee is scheduled to graduate this spring from UToledo with her bachelor’s degree. But her path to Toledo wasn’t quite the direct route she anticipated.

She graduated from high school at 15, having skipped a grade and fast-tracked her high school classes. It was earlier than she expected, and she wasn’t quite prepared to apply to college. She also had missed the scholarship deadlines.

So she enrolled at Wayne County Community College, where her mom taught. While at WCCC, she cross-checked the UToledo cosmetic science plan of study with her community college classes. She wanted to maximize the number of credits that would eventually transfer.

Two years later, in 2019, she transferred to UToledo with 60 credits, a 4.0 GPA and a generous scholarship.

This fall, Safee started doing research with Dr. Gabriella Baki, director of the cosmetic science program. Safee and her team are evaluating the effects of adding ultramarine blue pigment to foundations made for darker skin.

“One of the things that stood out about Raihaanah was that she did research at community college. I have only had a few students with research experience before coming to UToledo,” Baki said. “She’s very creative and on top of things. She has curiosity and a depth of interest in research. It’s exciting when a project resonates with a student.”

The problem that Baki’s research is trying to solve dovetails perfectly with why Safee felt compelled to become a cosmetic scientist.

As a teen, Safee tried to buy contour palettes for her skin tone, but they came in only three shades. She said she once spent more than $100 trying to find a yellow eye shadow that would show up on her eyelids.

“Growing up, there weren’t many cosmetic products marketed to me or made for my depth of skin color,” she said. “We live in a diverse world, and I want to make sure we cater to all ethnicities. I love research, being handed a project topic and letting my mind wander.”

Safee said she also appreciates the one-on-one time with Baki in her lab.

Safee has Baki to thank for her minor in sustainability. The program director suggested the minor because she knew of Safee’s interest in protecting the Earth.

Last summer, Safee aligned all of her interests when she got an internship at Cargill in Plymouth, Minn. Cargill, best known for its agricultural ingredients, also supplies ingredients for personal care products. Safee worked on creating a natural mascara and on testing hair texturizers to see if they resisted frizz.

Smita Fulzele, application laboratory leader at Cargill, was Safee’s supervisor. She said she likes to give interns a complete project that they can handle from inception to completion. Luckily for Safee, her internship coincided with the arrival of a new piece of equipment that allowed researchers to test products on hair samples.

Fulzele tasked Safee with setting up the new equipment, planning and making prototypes of hair conditioning cream, and executing experiments with the new equipment to generate data for hair care products.

“I let her take the lead on that,” Fulzele said. “Raihaanah was independent, diligent and hardworking. Her curiosity to learn will take her far.”

Cargill was a perfect match for all of Safee’s interests, she said, not only because it’s a big brand, but because its sustainability efforts and commitment to multiculturalism were integrated fully into the company. Cargill had multicultural councils for employees and focused on sustainable ingredients like a citrus fiber peel that allowed manufacturers to use almost the entire lemon with hardly any waste.

When she graduates, Safee said she wants to find a job, just like her internship, that allows her to pursue all of her passions.

“I want a position that ties into what I believe in,” she said.