A summer internship at NASA’s Glenn Research Center in Cleveland gave Sarit Dhar the opportunity to combine his passions for medicine and engineering while working on projects related to human health in space.

“I’ve been dreaming of working at NASA for a long time,” said Dhar, now a second-year medical student at The University of Toledo. “It’s space — it’s cool. I’ve always wanted to contribute to space projects.”

Prior to enrolling in medical school, Dhar earned a bachelor’s degree in bioengineering from UToledo. Though he had applied to NASA as an undergraduate, it wasn’t until the summer after his first year of medical school that he was offered the coveted 10-week internship.

The timing turned out to be ideal. 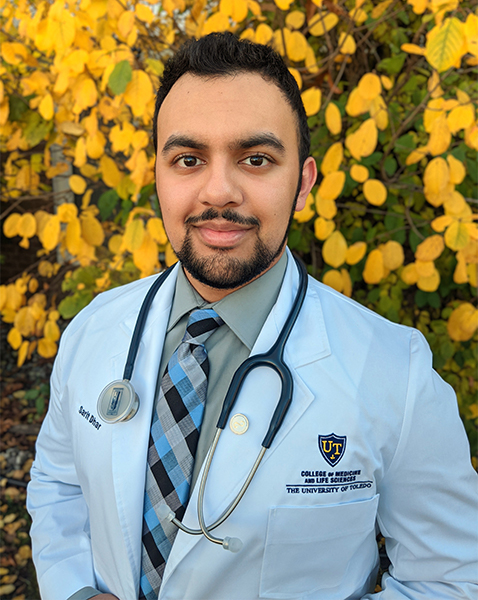 “Everything just aligned perfectly,” he said. “They appreciated that I had an engineering background and also had some medical experience because a lot of the people on my project were just pure engineers. Being a medical student gave me an interesting perspective of how different medical conditions manifest during space missions.”

Dhar’s work at NASA was centered on modeling and predicting medical events and equipment needed for long-duration missions, such as the Artemis program — NASA’s ambitious plan to put astronauts back on the surface of the moon and, eventually, set course for a manned mission to Mars.

One of the reasons Dhar chose UToledo was the fact the University offers both engineering and medicine and has research labs that bridge the two disciplines.

“Our students are able to merge engineering and medicine very well, and we are proud of that,” said Dr. Eda Yildirim-Ayan, associate professor and director of the undergraduate bioengineering program. “We are not only educating them to be the next generation of engineers, but we want our students to have the ability to excel in other areas while using their engineering skills along the way.”

Yildirim-Ayan and Dhar collaborated on a review paper recently published in the journal Life that explored the signaling pathways responsible for immune system changes that occur in microgravity — a key issue as humans probe deeper into space.

“He has really strong technical writing skills, he’s a team player and he’s ambitious. He targets something and he runs for it. I think that’s a recipe for success,” Yildirim-Ayan said. “We are lucky having students like Sarit who are motivated and hard-working. Our job is to channel them in the correct way.”

At NASA, one of Dhar’s projects was an intern challenge to design a way for astronauts to wash dirty laundry while in space.

With limited room, little water and zero gravity, the task is far more complicated than one might imagine. NASA astronauts currently wear the same clothes for days on end.

“Essentially what I learned from this is every single thing you try to do in space is super hard, no matter how simple it seems,” he said.

Now back in Toledo and in his second year of medical school, Dhar is thinking about what might be ahead in his future as a physician and how he might integrate his engineering background into his career.

Right now, he’s leaning toward a surgical specialty such as orthopaedics that would allow him to work with — and maybe one day design — medical devices.

“The human body is the most fascinating machine ever made,” he said. “Taking inspiration from the body is something I’ve come to enjoy so much. It’s a nice relationship between the two, medicine and engineering, and that’s what drove me to pursue both.”