Toledo turned a close game into a rout with three touchdowns in a span of 2:19 late in the first half to pull away from Bowling Green and cruise to a 49-17 victory in the annual Battle of I-75 Trophy at Doyt L. Perry Stadium Wednesday night.

Except for a brief period in the first quarter when the Falcons cut the lead to 14-10, Toledo (5-5, 3-3 MAC) thoroughly dominated the contest in every way, winning for the 11th time in the last 12 tries against its arch-rival. The Rockets outgained the Falcons, 539-196, including a staggering 352-64 in the first half. 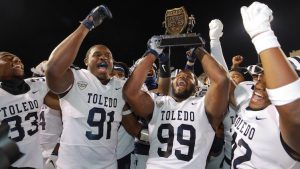 Toledo defeated Bowling Green for the 11th time in the last 12 meetings with its rival.

“This is a game everyone circles on their calendar every year so to get this win is huge for our players, one they will always remember,” said Head Coach Jason Candle, who is now 5-1 vs. Bowling Green. “We wanted our young guys to be a part of that, get a taste of that, and know what it means to our university and to our locker room.”

Toledo’s offense was balanced, with 269 rushing yards and 270 yards in the air. Redshirt Freshman quarterback Dequan Finn completed 18-of-24 passes for 270 yards and three TDs. Finn, who also ran for two scores, hooked up with eight different receivers, led by senior Danzel McKinley-Lewis, who grabbed three passes for 83 yards and one score. Junior Bryant Koback led the rushing attack with 121 yards and two touchdowns, while redshirt freshman Micah Kelly added 80 yards on 10 carries.

In the first quarter, Toledo jumped on the board on its first possession with a 50-yard run by Bryant Koback. After stopping BG on a three-and-out, the Rockets went back to Koback, who scored from 10 yards out to make it 14-0 with 6:51 left in the quarter. The scoring drive was set up by a 39-yard completion from Dequan Finn to Isaiah Winstead that brought Toledo to the BGSU 16-yard line. On Toledo’s third possession, the Rockets were stopped on fourth-and-one on their own 39-yard line, giving Bowling Green prime field position. Three plays later, Terion Stewart ran it in from eight yards out to cut the lead in half, 14-7.

BGSU further cut into Toledo’s lead on a 47-yard field goal by Nate Needham that made the score 14-10 with 10:56 left in the half. It took Toledo just three running plays to score its third touchdown of the night, 22 and 19 yards by Micah Kelly, followed by a 13-yard run into paydirt for quarterback Dequan Finn to give Toledo a 21-10 edge. Moments later, Finn hit Danzel McKinley-Lewis across the middle for a 59-yard score to increase the lead to 28-10. Toledo got the ball back one more time, and quickly scored again, this time on a six-yard pass from Finn to Matt Landers to pad the lead to 35-10. It was the Rockets’ third touchdown in a span of 2:19

To start the second half, Toledo began the second half with the same fire with which it ended the first 30 minutes, capping an 11-play, 75-yard drive with a Finn toss to junior tight end Jamal Turner that made the score 42-10.

Finn made it 49-10 with a nine-yard TD scamper on the third play of the quarter. BG’s longest scoring drive of the night culminated in a two-yard TD pass from Matt MacDonald to Jamal Johnson with 9:56 to go, but it was too little too late.

The Rockets travel next to Athens, Ohio on Tuesday, Nov. 16 for the last road game of the regular season.